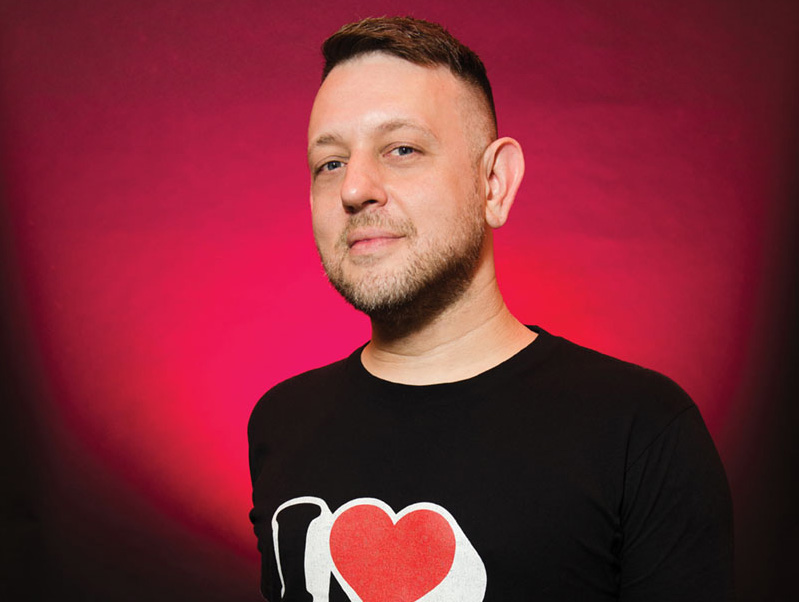 It’s been a year now since Uproar became the cozily intimate home for Charger Stone’s long-running, hirsute happy hour event. And this Friday, Aug. 9, those in the Crüe can opt to get even more intimate if they’d like. Two hours after doors open at 5 p.m., Stone has invited “Adonis” Ryan Lahr, a representative with Athena’s Home Novelties, to present, discuss, and sell the company’s wares. Taking a page from Tupperware, Athena’s enlists and instructs salespeople such as Lahr to host gatherings in a somewhat private, sex-positive “safe environment,” one where attendees can “view, sample, and purchase sensuous products.” At Uproar, interested bears will have to make their way to the relatively secluded second floor to see and buy the sex enhancers and insertables on offer until 9:30 p.m. Everybody else can drink, converse, and cruise as usual, missing out on newfound pleasures, perhaps, but not on the standard special of $5 per rail cocktail or 32 ounce draft pitcher of Bud Light or Shock Top. Free appetizers will also be offered, with additional food available for purchase off the restaurant’s food menu. Uproar is at 639 Florida Ave NW. Call 202-462-4464 or visit www.facebook.com/uproarloungedc.

On Saturday, Aug. 10, Dougie Meyer offers a roundabout but novel way of toasting the legacies of two of D.C.’s best-known and longest-standing LGBTQ dance clubs — Cobalt and Town — both of which closed over the past year. At the popular weekly LGBTQ party he throws at downtown’s trendy Soundcheck, Meyer welcomes two veteran local DJs for what is playfully billed as a “Battle of the DJs.” On one side, you have Jesse “Madscience” Jackson, who was an omnipresent resident at Cobalt, spinning through hip-hop and rock or techno and EDM as much as dance-pop and for both weeknight and weekend parties. On the other side, there’s DJ Wess, who essentially lived at Town every weekend, setting the pace for alt-night events and Friday nights in particular, throughout the Shaw danceboutique’s decade-long run. The party kicks off at 10:30 p.m. with a drag show hosted by Ba’naka and with additional performances from Brooklyn Heights, Bambi Necole Farrah, and Kristina Kelly, as well as the birthday queen du nuit Iyana Deschanel. Doors are at 10 p.m., and the bar offers $4 Absolut cocktails until midnight. Soundcheck is at 1420 K St. NW. Tickets are $14.99 to $19.99, or $24.99 for VIP with express entry and access to a private lounge with a dedicated bartender. Ages 18 and up. Call 202-789-5429 or visit www.dougiemeyerpresents.com.

Meanwhile, Trade is offering a delayed toast to the summer solstice this Saturday, Aug. 10, with a party that’s ultimately inspired by this summer’s hit scary Swedish-set movie Midsommar. Starting at 10 p.m., the party will offer a series of special ceremonies, capped off by a May Pole Dance competition in which the winner takes the title of May Queen. The prize is a flower crown and a gift card to IKEA. (Mid)Summer Camp is mistress of ceremonies, and DJ Ed Bailey is the musical guide. Maja will offer a cocktail with “special properties” for all those in attendance at this seasonal affair, which is Rated 21+. Trade is at 1410 14th St. NW. Call 202-986-1094 or visit www.tradebardc.com.

Next Friday, Aug. 16, U Street Music Hall presents the debut of a new quarterly series geared to the LGBTQ crowd, with each edition programmed around what could be called poptarts, or select contemporary pop music artists. The first harvest is a puckering blend of divas, pretty girls, and rude boys — as featured in the the music of Britney, Beyoncé, and Rihanna, played by DJs Matt Bailer and Honey. And then there’s the sweettart performances at midnight from some of the tartiest drag queens in town: Riley Knoxx, BABY, Desiree Dik, Brooklyn Heights, Iyana Deschanel, and Sasha Adams Sanchez. Washington Heights hosts. Party starts at 10 p.m., with dancing until 3 a.m. U Street Music Hall is at 1115A U St. NW. Tickets are $10 to $15. Call 202-588-1880 or visit www.ustreetmusichall.com.