Home / Features / OutWrite / OutWrite 2019: ‘The Lamb Will Slaughter the Lion’ by Margaret Killjoy

OutWrite 2019: ‘The Lamb Will Slaughter the Lion’ by Margaret Killjoy 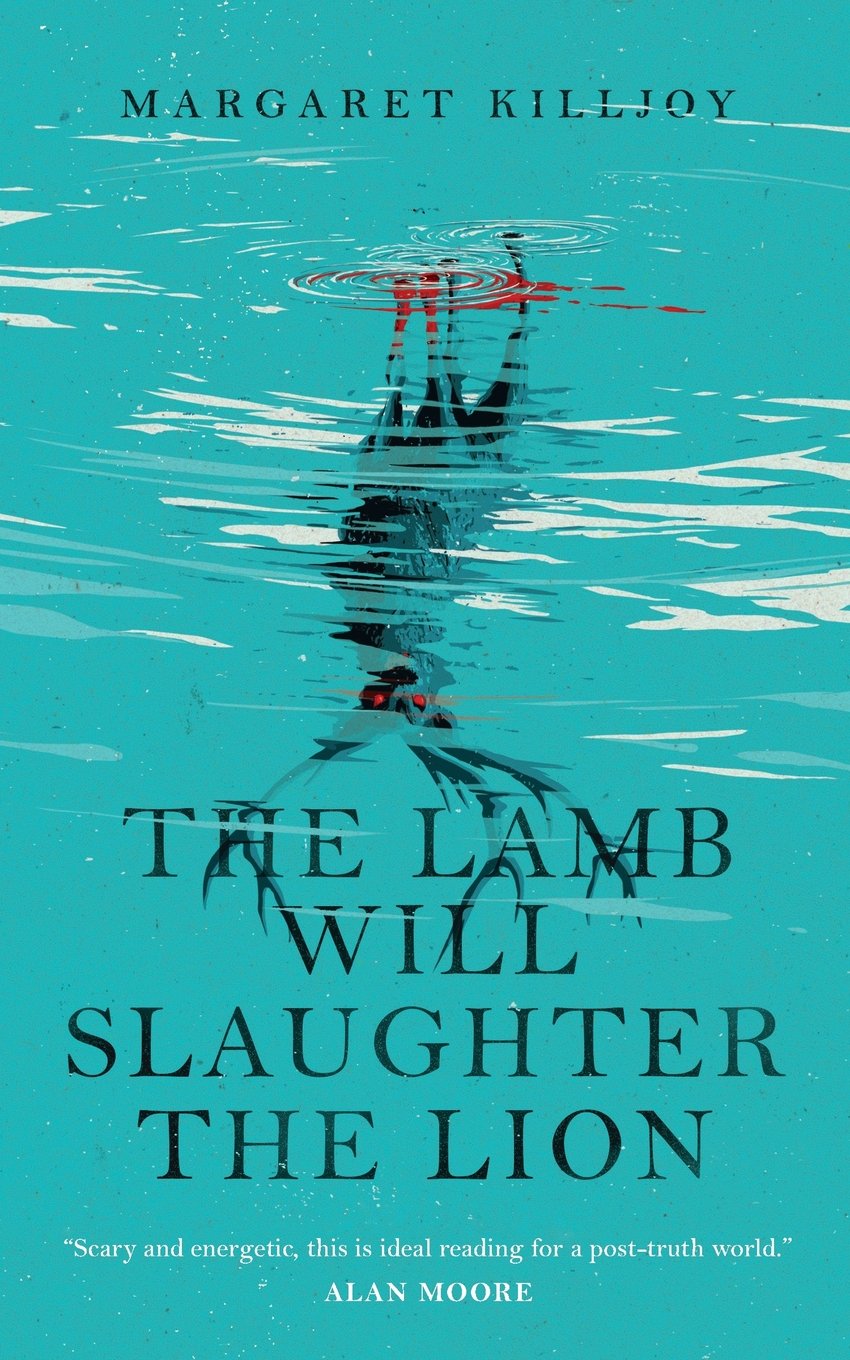 Sometimes you have to pull a knife. It’s not a good thing. I don’t enjoy it. But sometimes you just have to get a knife in your hands and make it clear which way the stabby end is pointing.

“Let me out here,” I’d said, before the knife got involved. It hadn’t been a question. Men always assume that declarative statements like that are questions.

“This is a ghost town,” he said. I hadn’t caught his name. He’d been nice enough to pick me up hitchhiking in the middle of nowhere Iowa, but he wasn’t nice enough to let me out where I wanted.

“There’ll be someplace better. A Walmart or something. I’ll let you out there.”

“I can’t just let you out in the middle of nowhere, not by yourself. It isn’t safe.” He said it without a trace of irony. He locked the doors.

That’s when the knife got involved. I slid it out from my jeans pocket, clicked it open. Pulling a knife means going double-or-nothing. I was either going to get out of the situation, or the situation was about to get a lot worse.

I unlocked my door, grabbed my pack, and hit the gravel before he came to a complete stop.

I flipped off his car as he drove away, but at least he was driving away. The worst of it was, he probably thought he was just taking care of me. That he was a nice guy. I hoped bad things were going to happen to him, and soon.

Ten years of putting up with shit like that from drivers. It was getting old. Hell, at twenty-eight, I was getting old. Ten years ago I’d talk to drivers about anything and love them for it. I loved the nice ones for their kindness, I loved the crazies for their stories, and sure, I hated the racist pieces of shit but if nothing else I got to feel like I had the pulse of this racist piece of shit country. But a decade is an awfully long time and whatever shine I’d found on the shit that is hitchhiking had long since faded. Still, it got me where I wanted to go.

The town’s welcome sign had been painted over. Don’t know what it used to say, but now, in clean stenciled letters, it said, Freedom, Iowa. City Limits. Unincorporated. An entire town, abandoned by a dead economy and occupied by squatters and activists and anarchists.

It was the last place Clay had lived, the last place he’d spent much time before he’d found his way west and his hand had shown his razor the way to his throat. No warning signs, no cries for help.

I had a lot of questions. If there were answers, I might find them in Freedom, Iowa.

I shouldered my pack and clipped the waist belt shut. It had been Clay’s pack. I had his suicide note folded up in the smallest pocket. The road into town was two lanes that led away from the highway, paved with pale, patched asphalt. The trees beside it climbed toward the sky, and I walked on the double yellow with something of a spring to my step.

After a hundred yards and a couple turns, when the trees were getting thick enough to cast the whole of the road into shadow, I saw a deer on the shoulder ahead, rooting at something on the pavement. The beast was crimson red. Bloodred. I didn’t know deer even came in that color.

I crossed to the far side of the street so I wouldn’t disturb it, but I couldn’t help but stare. A rabbit was dead on the ground beneath it, its belly up, its rib cage splayed open. The deer looked up at me then, its red muzzle dripping red blood.

I kept walking, because what else do you do? It watched me until I was around the next bend, and I couldn’t help but feel its gaze on my back. The only sounds in the air were birds and the faint white noise of a nearby river, and wildflowers were in bloom on the forest floor.

Another quarter mile, and I stepped out of the woods and saw the town on the far bank of a small, slow-moving river. Half a hundred houses were set into the hillside along a single winding street. A few old cars were parked along the curb and in driveways, but I couldn’t get a gauge on whether or not they were in use or abandoned. A two-lane bridge spanned the river. Clay had talked about the place like it was paradise.

I crossed over, pausing to look down over the guardrail at the water thirty feet below, as it tumbled and tore its way over river rock. Just at the other end of the bridge, a boarded-up gas station was covered in street art as good as any I’d seen in Oakland. It was a quarter mile farther up the hill to the first houses, and most were overgrown, more than a few with caved-in roofs. Others looked haphazardly maintained.

I walked into town, but I didn’t see any signs of life. No smoke or lights or motion. No one was out on the street or sitting on their porches. Maybe everyone had left when Clay had. Maybe the water was poisoned the same as it seemed to be in half of middle America, and seeing shit like that fucked-up mutated deer with three antlers made everyone realize it wasn’t safe to stick around.

The first five or six houses I passed were split levels, set into the hill. Welded-rebar statues populated one front lawn — a three-horned deer amongst other woodland and farmyard animals. Even the statue seemed to bore into me with its stare, and the damn thing didn’t even have eyes.

The next house, alone on its block, was an old colonial. It was handsome, its wood siding painted dark. Its circular attic window was an eye casting its longing gaze out over the river and Iowa. I walked up the cement steps to a large wooden patio on the side of the house and peered in through the sliding door, but it was darker inside than outside and I saw only my own straggly short hair reflected in a silhouette in the glass. I sat down on the porch chair and leaned back to ponder the empty town and my lack of luck.

I kicked back in the chair, put my feet up on the table, and looked out over the town. I’d make it my kingdom for the day, I decided, and hit the road again tomorrow. I had canned food enough to see me through at least three meals, and if I got desperate I had a jar of peanut butter somewhere in my bag that would keep me alive for days. I took out my phone and headphones, put on black metal, and dozed off.

I like the tiny little dreams I get when I sleep in the afternoon. That day, I was a very young goblin, riding this brontosaurus-like thing, and I was in love with a human boy and I was afraid he’d find out I was a goblin.

When I’m awake I’m happy sometimes, but I don’t know that I’m ever as happy awake as I am when I’m dreaming. Awake, I’ve got all this nostalgia, this feeling that I’m separated from something I can smell but can’t touch. I get these sudden, unbearable realizations that I should have been more present during all those moments in my life, that I should have taken the time to be like, “Oh shit man, this is my life, and it’s fucking awesome sometimes.” Dreaming, I just swim in the joy and the intensity and the now-ness of life.

Late in the afternoon, I heard rustling and opened my eyes halfway. On the railing in front of me, a rabbit cleaned its paws. I watched it, drowsy. It turned toward me, and its chest was a raw red wound, its rib cage and organs gone. It smelled like death and blood, and I don’t usually smell much in my dreams. It hopped away, and I presumed it a nightmare and fell back asleep.

The Lamb Will Slaughter the Lion (Danielle Cain #1), first published in August 2017, is available online at Politics and Prose and Amazon. For more information on Margaret Killjoy, visit www.birdsbeforethestorm.net.