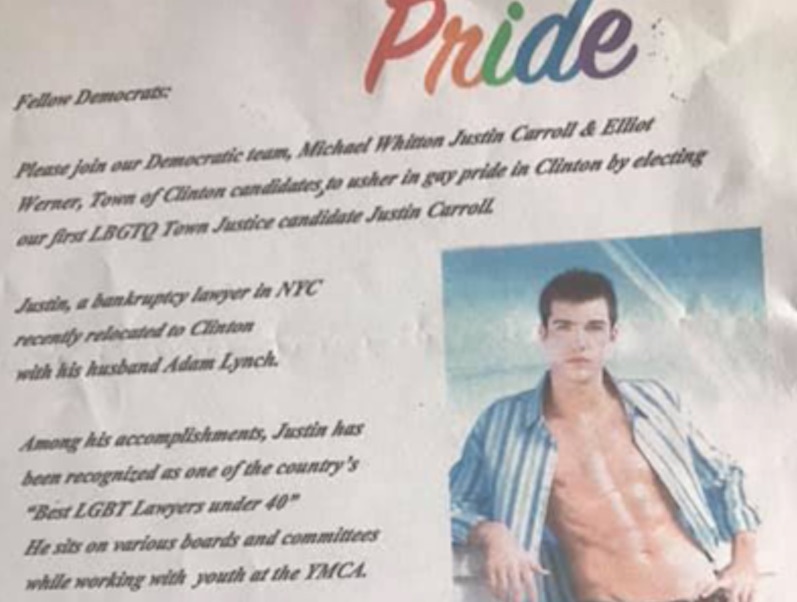 A candidate for Town Justice in upstate New York has been targeted by homophobic flyers emphasizing his sexual orientation and casting aspersions on his work with children at the YMCA.

Justin Carroll, 37, of Clinton, N.Y., says he learned of the flyers another candidate for office in the town of about 4,300 people had forwarded it to him.

The crudely-made flyer features the word “Pride” at the top in rainbow letters, and purports to be a letter sent to Democratic voters, telling them to “join our Democratic team” of candidates for office and touting the fact that Carroll would be the first LGBTQ Town Justice if elected this November.

“Justin, a bankruptcy lawyer in NYC, recently relocated to Clinton with his husband Adam Lynch,” the flyer reads. “Among his accomplishments, Justin has been recognized as one of the country’s ‘Best LGBT Lawyers under 40.’ He sits on various boards and committees while working with youth at the YMCA.”

The flyer features a Metro Weekly “Cover Boy” photo from 2005, with a younger Carroll wearing an unbuttoned shirt.

The flyer also tells people to visit VictoryFund.org for more biographical information on Carroll. The LGBTQ Victory Fund, which seeks to help LGBTQ people get elected to public office, has endorsed Carroll, but the flyer seeks to emphasize Victory Fund’s endorsement and Carroll’s orientation, proclaiming: “Justin will be the first openly LGBTQ elected official for the Town of Clinton.”

The flyer was posted to the Facebook page of the Hudson Valley News, sparking a slew of homophobic comments, all reiterating the same talking points about gay candidates flaunting their sexual orientation and implying that the LGBTQ community is pushing a particular agenda.

The outlet was later forced to issue a retraction after it was revealed that the ad had been sent by a fake, unverified email address.

“At first I thought the ad was just kind of laughable how amateurish it was, given the sophisticated nature of my campaign,” Carroll told Metro Weekly. “Second, it was disheartening, to think about that coming from this community where I’ve moved with my husband.”

“We’ve been living here for almost five years. It’s our full-time residence, it’s our only residence,” says Carroll. “We moved up here to raise a family. It reminds us of the places where we grew up, in Connecticut and Oregon. We’ve had the most wonderful interactions with our neighbors over the past five years and are familiar with all the local establishments. I serve on the town planning board, and am involved in the local community.

“But obviously when opponents don’t have things to talk about, they find things to manufacture,” he adds.

Noting that the photo is from Metro Weekly and is more than a decade old, Carroll says the flyer “felt like it was trying to weaponize my coming out story and things that I’m proud of, but with these nefarious undertones of ‘these people are invading our town and maybe they shouldn’t be left around children.’

“That’s a disgusting sentiment, and it has no place in our public discourse,” he says.

Noting that there are only two candidates in the race for Town Justice — incumbent Justice James Brand and Carroll — the LGBTQ Victory Fund denounced the attack, calling it “disqualifying” for someone seeking “a town justice position that demands impartiality.”

The organization also predicted that voters would see through the ruse and that Carroll would eventually be elected in spite of the attacks against him. 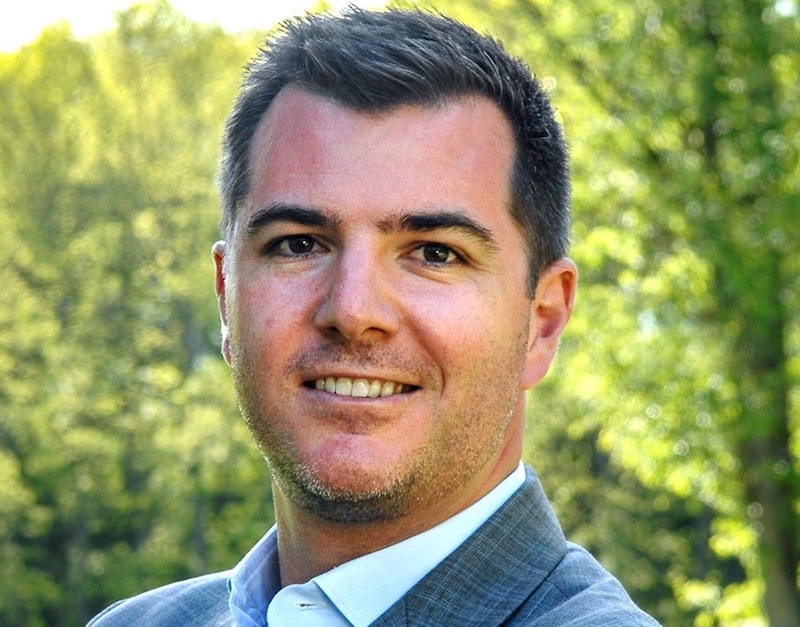 Carroll says he later talked with the editor of the Hudson Valley News, who admitted that he had not checked the validity of the emails he had received and posted a retraction. However, he claims that retraction was taken down after subsequent Facebook comments got out of control.

He also questions who would have the time or motivation to go about creating an elaborate ruse with fake email addresses to smear him.

“It’s just a little perplexing when you think of who’s invested in this enough to go to these lengths to spread this kind of vitriol,” he says.

Nonetheless, he’s undeterred by the attacks.

“We’ve seen for decades how LGBTQ politicians often face these types of homophobic attacks, especially in places where there’s no LGBTQ person in office, but I think these types of attacks are increasingly backfiring,” he says, noting that his campaign has set a record for donations and has been flooded with messages from people offering assistance since the fake flyer was posted online.

“This is not the first time in our area where an LGBTQ candidate has come under fire for being LGBTQ,” Carroll says. “But I don’t think it’s a prevailing opinion. This isn’t something that comes up during conversations with voters. I’m focused on the issues important to our town. Anyone who’s supporting me is interested in those issues, and they don’t want to see neighbors attacking neighbors. That’s just not the kind of place we are up here.”

For more information on Justin Carroll and his campaign, visit www.ElectJustinCarroll.com.