Abel Cedeno claimed he stabbed two of his classmates, one fatally, after he was bullied for being gay at school

By John Riley on September 11, 2019 @JohnAndresRiley 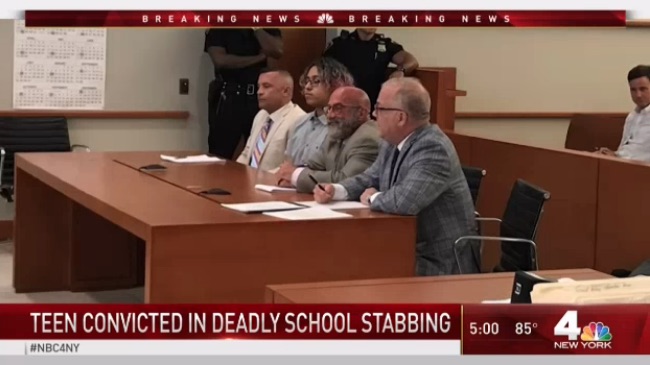 The Bronx teen convicted of fatally stabbing a classmate and injuring a second has been sentenced to 14 years in prison.

Abel Cedeño was found guilty of manslaughter in a bench trial in July for the 2017 slaying 15-year-old Matthew McCree, a classmate of his from the Urban Assembly School for Wildlife Conservation. Cedeño was also found guilty of criminal possession of a weapon and assault for stabbing classmate Ariane Laboy when he attempted to intervene in the altercation between Cedeño and McCree.

At trial, prosecutors argued that Cedeño had brandished the knife used in the stabbing on social media days before the incident, which they claimed was evidence he had planned the attack beforehand.

But Cedeño claimed that he had endured years of bullying because of his sexual orientation before he snapped, and had brought the knife to school to defend himself should be be attacked.

Cedeño testified during his trial that his classmates had been harassing him in class prior to the stabbing. He then excused himself to go to the bathroom, but returned with a knife. He claimed he didn’t remember stabbing anyone, but remembered being attacked.

Prosecutors acknowledged that McCree and Laboy, as well as others, had been throwing broken bits of pencils, pen caps, and balls of paper at Cedeño’s head during history class, but asserted that neither McCree nor Laboy had bullied Cedeño on a regular basis.

On Tuesday, Justice Michael Gross refused to grant a request from Cedeño’s lawyers that their client be treated as a youthful offender, saying that being a victim of bullying could not be seen as a “license for murderous rage,” reports The New York Times.

Gross also said he believed that Cedeño had been bullied, but noted that the teen had testified that he had not really known his victims and that they had not tormented him.

Cedeño addressed the court, telling Justice Gross that he was not the same person he had been two years ago, and that he was remorseful for his actions.

“I know that I was the one who brought in a knife,” he said. “I wish I could take it all back.”

John Riley is the local news reporter for Metro Weekly. He can be reached at jriley@metroweekly.com
← Previous Story New Orleans radio station tweets anti-gay slur about its own employee
Next Story → James Baldwin’s New York residence added to National Register of Historic Places