By John Riley on September 27, 2019 @JohnAndresRiley

A display of some of the reading titles and resources inside “Hope in a Box” – Photo: Joe English/Hope in a Box.

“Rural and low-income schools are still scary places for most LGBTQ kids, even in 2019,” says Joe English, the president and founder of Hope in a Box.

“I grew up in a 1,900-person town in upstate New York,” English continues. “When I was growing up, every book I read, every song I listened to, every movie I watched, and basically every person I knew — it all focused on straight narratives. And I remember feeling very acutely alone as a result of that. This is the reality for many, many kids who live in rural and low-income America.”

After completing college, English went back to his local high school and had frank conversations with some of his former teachers about the isolation he had felt as an LGBTQ student. From those conversations, it became clear that, while most teachers are well-meaning when it comes to wanting to support their LGBTQ-identifying students, educators often don’t know how to proceed.

“There’s uncertainty around which specific resources to use, how to incorporate these topics into class appropriately, and, of course, budget is always an added constraint,” says English. “When I was a student in high school, we literally did not have funds for a sports program, much less investment in LGBTQ-inclusive literature.”

Those conversations were the impetus for English’s start-up nonprofit, Hope in a Box, which was founded in 2018 to provide LGBTQ resources to teachers in rural and low-income classrooms.

Utilizing input and feedback from educational experts, such as university professors and middle and high school teachers with experience in these types of lesson plans, Hope in a Box has designed a bibliography of 50 books — complete with supporting movies, magazines, and albums — that teachers can incorporate into their curricula.

“We want to change how rural schools think about LGBTQ diversity and mental health,” English tells Metro Weekly. “And we think English and history classrooms are a great place to start.”

In the spring of 2019, Hope in a Box partnered with 25 rural public schools across the nation by providing them with “Starter Boxes,” packages of 20-30 books from the approved bibliography, along with supporting multimedia and curriculum guides, crafted to individual grade-level or classroom needs.

Some of the pilot schools selected as part of the initiative included a traditional Mormon school in Washington State, low-income schools in rural Vermont and New Jersey, and schools in conservative Southern communities in Tennessee and Alabama, as well as schools in Nevada, Virginia, Kansas, and Ohio.

Teachers in the pilot schools have hailed the resources as a positive development and noted that it can be potentially life-saving.

Based on their feedback, 100% of educators in the pilot schools felt better equipped to reach out to and support LGBTQ students, and 90% believe that the inclusion of LGBTQ-friendly materials and lesson plans has helped improve their students’ emotional wellbeing within one semester of incorporating the materials and lesson plans into the classroom.

Additionally, 80% plan to formally incorporate some of the materials into their curricula for the 2019-2020 school year.

According to a 2017 survey of school-age students by the Human Rights Campaign, just 13% of students reported hearing positive messaging around LGBTQ identity in schools. Among LGBTQ students, only 1 in 4 report feeling safe in school, while 73% say they regularly receive threats because of their sexual orientation or gender identity.

“A lot of rural communities are very small, especially compared to places like New York City and Washington, D.C. So that means your social networks are really intertwined. So when a queer young person comes out in one situation, say, their church or their school, the interconnectedness of rural communities means that there’s a higher likelihood for that information to touch many other aspects of their life,” says English. “And that for many people, increases the risk of being open about their identity or even asking questions about sexual orientation or gender identity diversity. 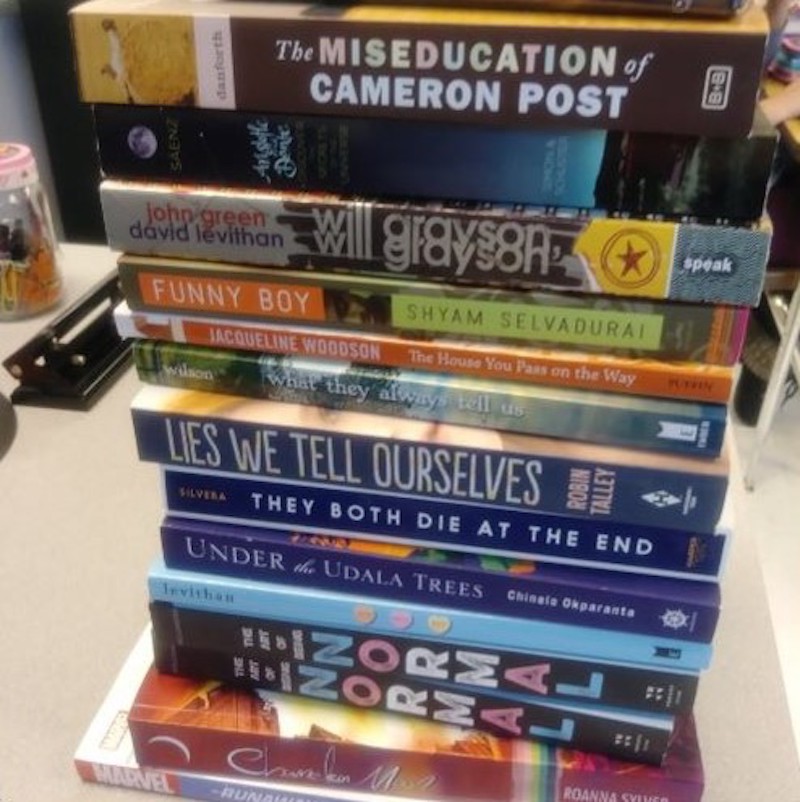 “A lot of times, also, there’s a lower percentage of people in rural communities who have diverse identities. So there’s a lower likelihood of people seeing themselves around the community as they’re growing up,” he adds. “That can heighten the sense of ‘Maybe there’s something wrong with your identity,’ or ‘Maybe there’s a reason you’re not seeing your identity,’ which can feed into cascading negative externalities on mental health, like anxiety, depression, or substance abuse.”

“Hope in a Box’s work is literally saving lives,” Jennings said in a statement. “When young LGBTQ people see themselves reflected in school curricula, their sense of self and well-being goes up dramatically, and rates of bullying and harassment drop just as dramatically. By providing these resources to schools with little access to them, Hope in a Box is making a life-saving difference for many young people.”

By the end of the 2019-2020 school year, Hope in a Box hopes to support hundreds of schools in all 50 states. Already, 200 schools across 35 states have joined a waitlist to receive their own “Starter Boxes.”

The nonprofit also offers single-copy kits — with supporting multimedia resources — for teachers who want to incorporate individual LGBTQ-inclusive books into their lesson plans.

“As a queer Latino educator, I am deeply committed to fostering a loving and inclusive classroom environment for every student. The books Hope in a Box so graciously gifted my classroom has helped me create a classroom that is affirming and accepting of all identities,” says Israel Tovar, a 10th grade social studies teacher at a charter school in Washington, D.C.

“During independent reading time, my students have been reading the books and actively voicing how much they are enjoying reading them,” he notes. “I am confident that these books have already beautifully impacted the lives and world views of my students.”

For more information on Hope in a Box, or to request materials, visit www.hopeinabox.org.

Betty Who on her queer identity: “I don’t even know what I am”