By John Riley on September 20, 2019 @JohnAndresRiley 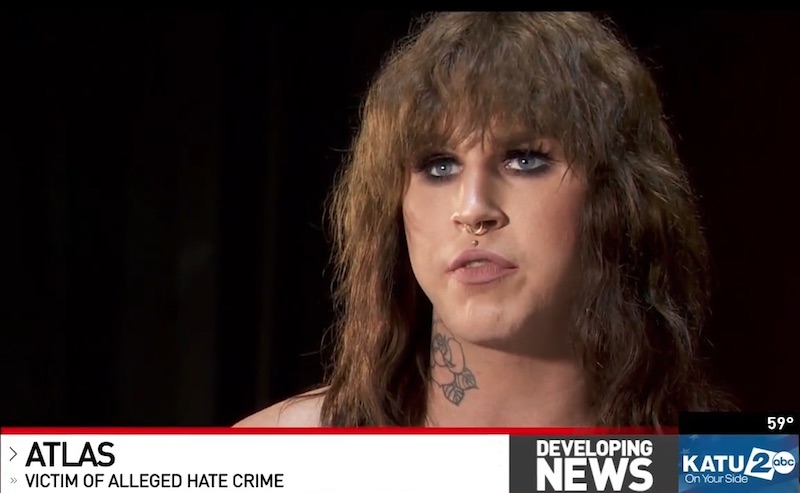 Atlas, the transgender woman who was attacked in downtown Portland – Photo: KATU.

A transgender woman claims she and her friend were attacked by a group of men in Portland, Ore., as part of an alleged hate crime.

The woman, known as Atlas, says she and her friends approached a group of men near a line of food carts in downtown Portland around 2:30 a.m. on Sept. 12. She says that one of the men recognized that she was transgender and began harassing her.

“He started calling me all kind of slurs and homophobic and transphobic things,” Atlas told Portland ABC affiliate KATU. “He just got more and more escalated and continued to say more and more things that were very much like hate speech. Then he started to approach me. Then he and his friend attacked me.”

Atlas says before she knew it, she was on the ground bleeding. She suffered injuries to her head and knees, and her friend, another member of the LGBTQ community, suffered a broken nose.

“My whole body hurt, like honestly, it felt like I had gotten hit by a truck,” she said.

Police responded to the scene to find the three victims, but have thus far not identified any suspects. The incident is being investigated as a possible bias crime and remains under investigation.

However, about two dozen transgender women in the United States are killed each year, with 26 murdered in 2018 and 20 killed thus far in 2019.

“Having someone want to hurt me because of the fact that I live a life that makes me happy and truly feel that this is who I am is really scary to me,” Atlas said. “This is just going to make me even more diligent when it comes to fighting so the next person doesn’t have to. I’m hoping by talking about this experience and not just making it about me, it creates a bigger dialogue.”