Candidates respond to remarks, since amended, by Beto O'Rourke calling for no tax breaks for opponents of same-sex marriage 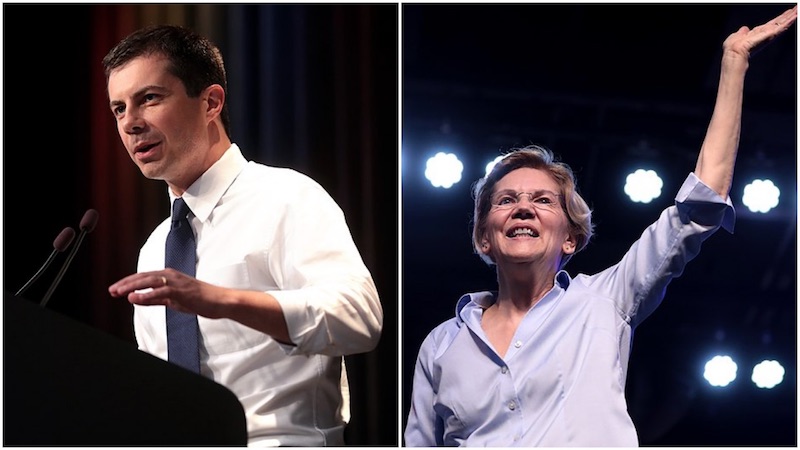 Democratic presidential candidates Pete Buttigieg, the mayor of South Bend, Ind., and Sen. Elizabeth Warren (D-Mass.) have come out against penalizing churches and other religious institutions by stripping them of their tax-exempt status due to their opposition to marriage equality.

The 2020 hopefuls’ comments came in response to conservative outcry over remarks made last Thursday by former U.S. Rep. Beto O’Rourke (D-Texas) during a presidential town hall forum hosted by CNN and the Human Rights Campaign focusing on LGBTQ issues.

O’Rourke was asked whether religious institutions, like colleges, churches, and charities should lose their tax-exempt status if they oppose same-sex marriage.

“There can be no reward, no benefit, no tax break for anyone, or any institution, any organization in America, that denies the full human rights and the full civil rights of every single one of us,” O’Rourke responded. “And so as president, we are going to make that a priority, and we are going to stop those who are infringing upon the human rights of our fellow Americans.”

O’Rourke has since backtracked and sought to clarify his stance on the issue, but his response is already being used to attack Democrats by casting them as anti-religious and attempting to reignite cultural wars over same-sex marriage by offending social conservatives.

Speaking over the weekend at the Values Voter Summit in Washington, D.C., President Trump attacked O’Rourke (though without directly naming him), calling him a “wacko” and playing on conservative fears that Democrats will use the IRS as a “political weapon,” reports NBC News.

The day following the forum, an O’Rourke campaign spokeswoman suggested that his remarks had been deliberately misinterpreted.

“Of course, Beto was referring to religious institutions who take discriminatory action,” spokeswoman Aleigha Cavalier said. “The extreme right is distorting this for their own agenda.” She added that O’Rourke defines discriminatory action as “denying public accommodation” on the basis of a person’s gender, sexual orientation, or marital status (as with a hall or villa that might be owned by a religious institution but is rented out to the public).

O’Rourke then followed up on an appearance on MSNBC on Sunday to clarify his beliefs.

“The way that you practice your religion or your faith within that mosque or that temple or synagogue or church, that is your business, and not the government’s business,” he said. “But when you are providing services in the public sphere, say, higher education, or health care, or adoption services, and you discriminate or deny equal treatment under the law based on someone’s skin color or ethnicity or gender or sexual orientation, then we have a problem.”

But in political terms, O’Rourke’s statement was a massive political blunder that could easily be used as fodder against him in the presidential campaign, as many outlets will only report his initial comments.

Mindful of the potential for the issue to become a political minefield, and the fact that Republicans will reframe the issue from a debate over whether anti-LGBTQ discrimination is acceptable to a debate about the ability of people to worship freely under the First Amendment, other Democrats are distancing themselves and coming out strongly against revoking the tax-exempt status of churches.

Buttigieg, the only major openly gay candidate for the Democratic nomination, explained that he opposes instances of anti-LGBTQ discrimination, including in schools, but sought to contrast himself with O’Rourke, saying that Beto’s initial proposal could violate separation of church and state.

“The idea that you’re going to strip churches of their tax-exempt status if they haven’t found their way toward blessing same-sex marriage — I’m not sure he understood the implications of what he was saying,” Buttigieg said during an appearance on CNN’s State of the Union.

“That means going to war with not only churches but also mosques and organizations that don’t have the same view of religious principles as I do,” he added. “Going after the tax exemption of churches, Islamic centers or other religious facilities in this country is just going to deepen the divisions we’re already experiencing.”

“Elizabeth will stand shoulder to shoulder with the LGBTQ+ community until every person is empowered and able to live their life without fear of discrimination and violence,” Saloni Sharma, the campaign’s deputy press secretary, told NBC News. “Religious institutions in America have long been free to determine their own beliefs and practices, and she does not think we should require them to conduct same-sex marriages in order to maintain their tax exempt status.”

John Riley is the local news reporter for Metro Weekly. He can be reached at jriley@metroweekly.com
← Previous Story Trans man’s jaw broken after brutal attack in Philadelphia 7-Eleven
Next Story → Lesbian officer settles discrimination lawsuit against Michigan Department of Corrections