In his latest series, artist David Amoroso pays tribute to those who raised him: the TV icons and shows of his childhood 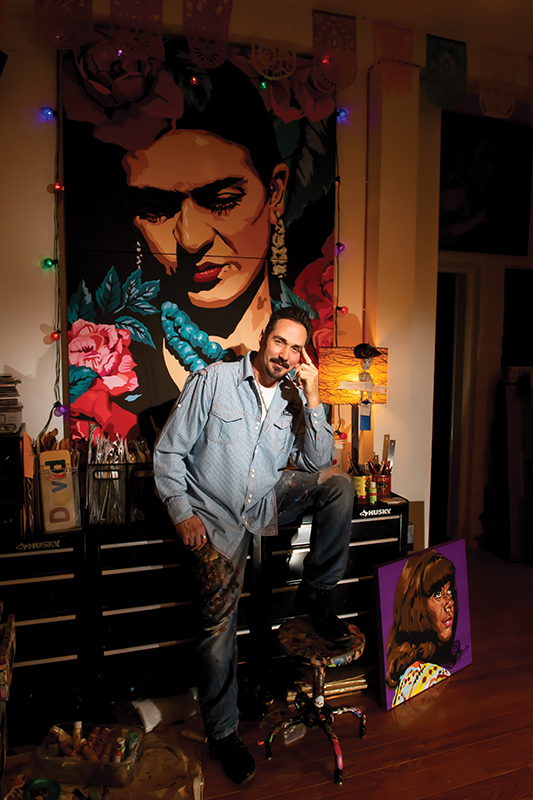 “People just assume I’m Latino,” says David Amoroso. “I’ll just be walking on the street and people will start speaking to me in Spanish. And then sometimes I’ll go into a Spanish-speaking environment and the people that are there will speak English to me. It’s very odd.”

Amoroso has only compounded the confusion with the art he creates. “A lot of my work does focus on Mexican iconography,” says the 56-year-old artist. “When I paint those things, people assume it’s because I grew up in an environment that’s Spanish-speaking and had Mexican influence. I definitely didn’t.”

The answer is no, across the board. He’s an American who was raised in Northern Virginia in an Italian-American household. He actually doesn’t know much more beyond that. Ultimately, he plans to keep it that way.

“I was adopted as a baby in Philadelphia — I know nothing about the individuals who placed me up for adoption,” he says. “I am not interested in taking a DNA test, because I prefer to not know where I came from. That gives me the flexibility of creating my own history.”

Amoroso has been doing that all along — creating the man, and the artist, by going it alone, charting his own way, on his own terms. Although he was raised in a family with a mother, a father, and two sisters, he never felt a strong sense of support and encouragement, of bonding and belonging, even of love — despite the fact that the family name — Amoroso — means loving in Italian. 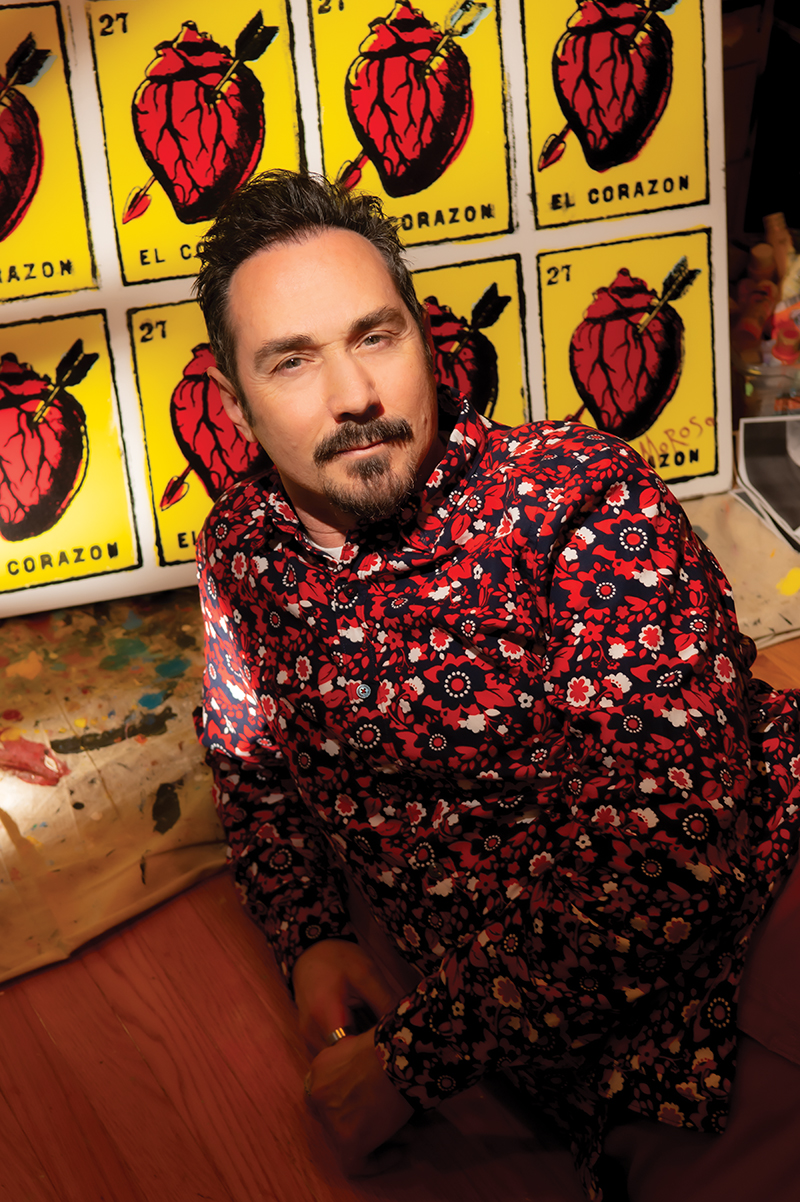 “We are all so different that we definitely lived as strangers in one house,” he says. “We all just sort of stayed in our own corners. [You could] compare it to having five cats that don’t get along. They just go to their area and ignore each other.” As one minor but instructive case in point: “Honestly, I didn’t even know my dad had a Master’s degree until he died. It was in his obituary.”

Instead, Amoroso reveled in the things that brought him comfort. “My childhood escape was a mix of TV, music, and drawing,” he says. “I would spend hours in my room listening to music, or in the basement watching TV and sort of absorbing into it. I liked to draw as a child, so I would always do drawings and things.”

Television was more than just an escape — it was an influence on his future art, one that forms the core of a March exhibit of recent works at Artists & Makers Studios in Rockville, Maryland. Raised by TV is a collection of approximately 20 new paintings paying tribute to many of the television sitcoms and celebrities who had an early and lasting impact on Amoroso, all drawn from his childhood in the late 1960s and ’70s. In those days, screens were populated with eccentric characters and idealistic adults who, mercifully, looked and acted little like those people Amoroso confronted in real life. None of them more so, of course, than the perfect parents from The Brady Bunch, Carol and Mike Brady.

“She was warm and empathetic, and he was stern but always fair,” Amoroso writes in the exhibition statement. “Although the lessons they taught seemed painfully obvious to even a child, it was reassuring to know that somewhere parents were doing their job.” By contrast, he found his own parents — an “alcoholic mother and physically abusive father,” as he describes them — to be generally either absent or abject.

“I always thought, as a kid, I was adopted because I was a martian. I know that sounds ridiculous, but at the time it made sense.” Amoroso was a big fan of My Favorite Martian, a sitcom about a man who takes in a human-looking alien with secret powers. The show helped him cope by putting things into perspective. “It’s something that sort of maintained me because I’m like, ‘Okay, this is just temporary that I’m here.’ The fact that he lived with another man — it seemed like a non-sexual gay couple.”

And that’s another way television helped shape and offer solace to the young, impressionable Amoroso. Given the time period, immediately before and after Stonewall, it’s not surprising that no one on TV was openly gay the way we mean it today, and issues of sexuality and identity were never explicitly discussed. And yet, anyone who was curious and questioning themselves didn’t have to look too hard or too deep to find kindred spirits. “We had Match Game with Charles Nelson Reilly, Paul Lynde in Bewitched — all of these people that were gay,” says Amoroso. 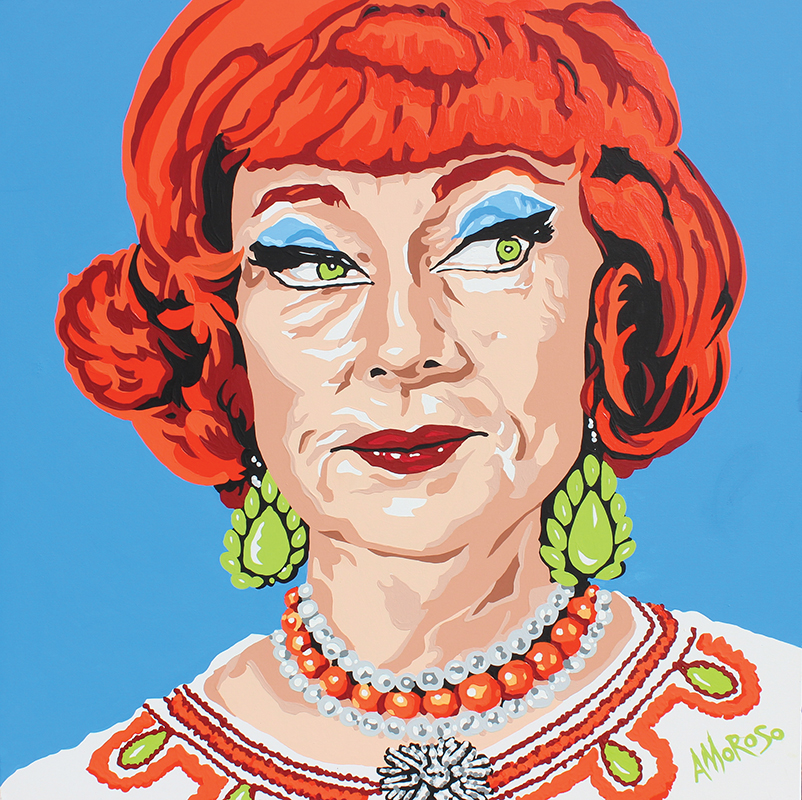 None of those people were out at the time, of course, and neither was the not-yet-adolescent Amoroso. But something about that early exposure, and especially that kind of unstated yet unmistakable way of being gay, has had an impact on the artist that lasts to this day. “I think it’s a sidebar for me versus an important part of my identity,” he says, when asked about his coming out. “It’s interesting because I look at other friends that I had back then that were gay, and they struggled more with it. I don’t remember being bullied or picked on for that. I was picked on because I was weird, and maybe that was the understory to it, I don’t know. I’ve never really thought about it that much. I think I’ve always just been objective: ‘This is the way I’m born. This is what I do.’ I treat it usually as a need-to-know basis. But ‘nothing to hide, nothing to say,’ to sum it up.”

In art as in life, you can detect a distinct gay sensibility with Amoroso, yet usually only in subtle or suggestive ways. Amoroso points to one of his earliest groupings of paintings as being instructive. His “retro wallpaper series” features “portraits of guys sort of macho-posturing. Then I do retro wallpaper designs over them in floral. I don’t think it’s gay per se in theme. I love it from more of the standpoint of body modification — like tattoos. The designs I’m putting on the subjects, I’m layering them like tattoos. A lot of the guys are tattooed, but I won’t paint their tattoos in the paintings. Most of the guys are straight. They’re just friends of mine. So they don’t necessarily view it that way, either. But once in a while, one will ask, ‘Do you have to put so much pink in it?'” Amoroso’s response? “Oh, come on. You’re tough enough. You can handle it.” 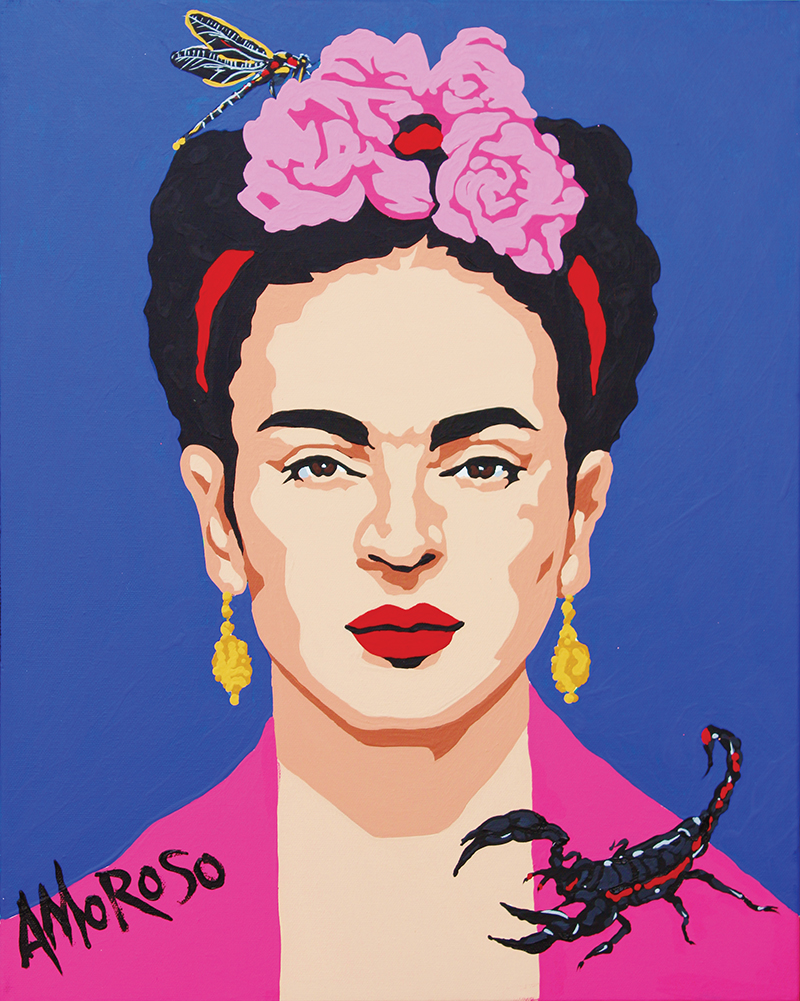 To create such portraits, Amoroso generally prefers to start with photography. “I’ll photograph the guys, get the lighting how I want it, then I’ll paint and do the designs over them.” Ideally, everything starts with a photograph.

“Right after high school, I started doing a lot of photographic portraits and fashion portfolio things,” he says. It started strictly a hobby, as Amoroso never thought to pursue art as a career, in part because he didn’t know it was a viable option.

That all changed one night. While he can’t recall precisely what prompted a particularly testy exchange with his father, Amoroso can never forget how it ended. “I remember my dad saying, ‘Well, you’re 18 now. You’re old enough to take care of yourself.'” And just like that, he was off. “I remember feeling furious about that comment. I packed up my stuff, threw it in my Camaro, and just left and couch-surfed for a while.” He quickly learned photography was a viable pursuit. “I’d be working full-time in a warehouse job or retail job, often doing the photography [on the side]. Honestly, the photography kept me financially liquid throughout all that.” 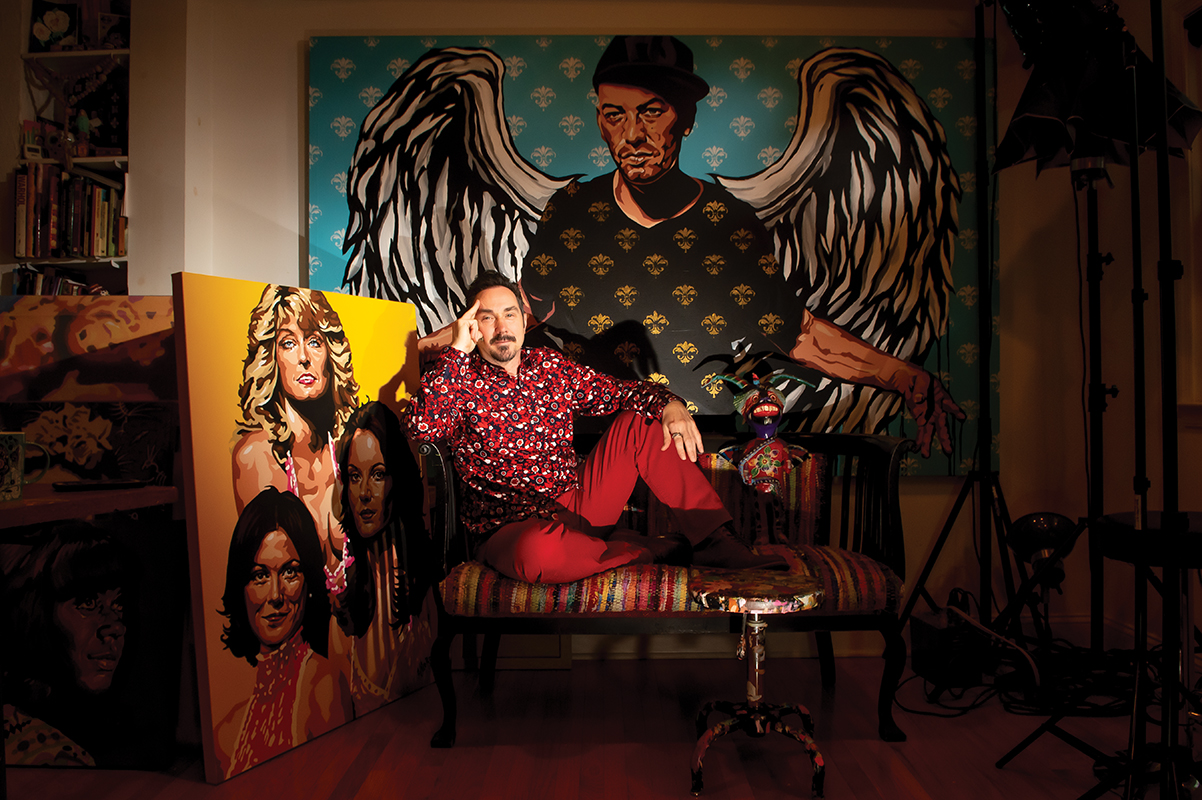 In the decades that followed, Amoroso has pursued several different career paths — in the arts and in community-based assistance — often simultaneously. These days, he juggles his full-time and fully sustaining work as a painter with meaningful employment on the side, teaching underserved residents in Northern Virginia employment-based skills and work readiness. Recently, he’s found himself reaching a “breaking point,” a result of often working up to 18-hour days. Amoroso expects to let go of the community work in the next year or so.

As an artist, Amoroso is eager to grow further — as well as further afield. “I would love to paint bigger. I would love more large modern gallery-style exhibits,” he says. And he would like to expand his audience of collectors beyond his primary markets of D.C., California, and Texas, ideally by pushing into New York.

What he doesn’t anticipate for his future is dipping back into making art motivated by politics. During the later years of George W. Bush’s presidency, Amoroso created a few artworks that mocked the president, among other political advocacy themes. “A lot of people ask, ‘Why haven’t you done anything like that with Trump?’ With Bush, I thought it was hilarious that he seemed like such a buffoon. With Trump, just hearing his voice, reading something he says, or seeing his face, I have a visceral response to it. I never cared for him, ever. But as repugnant as he is, my bigger issue is with the fact that he has support. I’m naturally wired for pessimism, but I still had hope in humanity. I still do to some extent, but just knowing how many people support him terrifies me.

“Honestly, it’s one of the hardest things for me,” he concludes. “I want to do something with my art that is more political, but I swear, I would be too traumatized and nauseous using Trump’s image in anything. I don’t know how to do that. There are a lot of other people doing a really great job, so I’ll let them do that while I meditate with happy, bright colors.”

For more about David Amoroso, look for @AmorosoART on social media or visit www.amorosoart.wixsite.com/davidamoroso.