By John Riley on February 3, 2020 @JohnAndresRiley 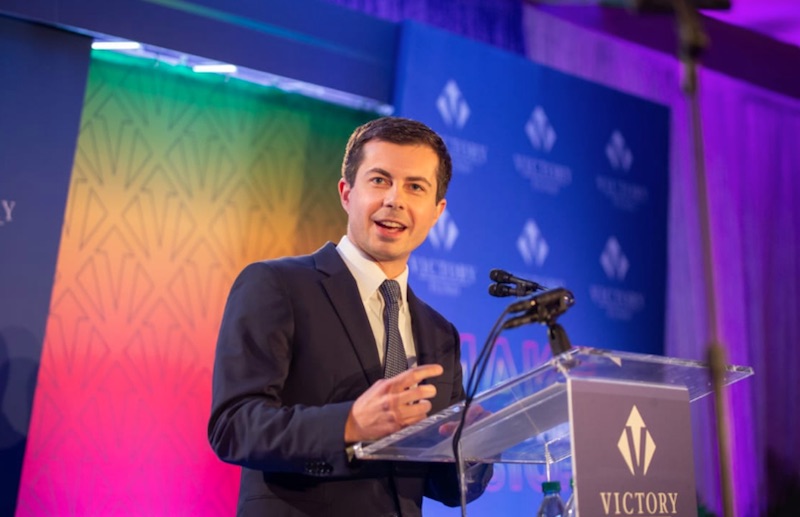 Former South Bend Mayor Pete Buttigieg will make history this evening when he becomes the first openly LGBTQ person to run in the Iowa Democratic caucuses.

Buttigieg has currently established himself as one of four leading candidates in the 11-candidate field, along with Sen. Bernie Sanders, former Vice President Joe Biden, and Sen. Elizabeth Warren.

Due to the unpredictability of caucuses compared to primaries, it is difficult to predict what order the top four will finish in, though support for Sanders seems to have surged in the days just prior to the caucus and he is likely considered the frontrunner.

Nationally, most polls show Biden leading the field, with a relatively constant level of support — though the size of his lead over Sanders, in particular, has dwindled.

“As Iowa voters head to their corners and declare their presidential allegiances, it is important to step back and appreciate that this caucus day is a significant moment in American history,” Annise Parker, the former Houston mayor and president and CEO of the LGBTQ Victory Fund, said in a statement. “Today, Pete becomes the first openly LGBTQ person to run in the Iowa Democratic caucuses — a historic event that all Americans should take pride in and celebrate regardless of the results tonight.

“One year ago, few would believe an LGBTQ presidential candidate would soar in the polls, kiss his husband before an announcement speech or speak about coming out from the national debate stage,” Parker added. “Pete’s candidacy marks a revolution in American politics, forever transforming what is possible for an LGBTQ candidate to achieve. Pete has shattered expectations throughout this primary season and we are confident Iowans will help him do it again tonight.”

The LGBTQ Victory Fund endorsed Buttigieg last June, on the 50th anniversary of the Stonewall Uprising.

Buttigieg earned the endorsement in part because of his performance in public polls and his ability to fundraise, which demonstrated his viability as a candidate.

The historic nature of Buttigieg’s candidacy as an out LGBTQ individual follows in the footsteps of Fred Karger, who sought the Republican Party nomination in 2012.

JoDee Winterhof, the senior vice president of policy and political affairs for the Human Rights Campaign, and a native Iowan, recently posted a video to Twitter of her interviewing some LGBTQ Iowans about the importance of voting in the caucuses.

This weekend, @HRC took to the streets of Des Moines to hear from LGBTQ and pro-equality #IACaucus goers, as well as @RepCindyAxne and @KF_Crow and Courtney Reyes from @OneIowa.

And we had some fun along the way! #IowaCaucuses pic.twitter.com/GEFK9SXSOh

Last year, HRC released an “Early Voter Snapshot” looking at the power of LGBTQ and LGBTQ-friendly voters in Iowa and other early states.

That snapshot found that of nearly 2 million registered Iowa voters, 449,000 say they prioritize LGBTQ issues when making voting decisions, and 87,000 identify as LGBTQ.

HRC — which has not endorsed a candidate in the Democratic primary thus far — has characterized the 2020 election as one of the most consequential for LGBTQ rights due to the Trump administration’s actions to erode protections in health care, adoption, and education, its embrace of exemptions to protect the “religious freedom” of anti-LGBTQ opponents, and the president’s decision to appoint judges with anti-LGBTQ statements or voting records to the federal bench.

While Buttigieg is the only openly gay candidate seeking the Democratic nomination this year, the other contenders have established a record of supporting equality measures, with some even releasing detailed plans for LGBTQ-specific policies they’d pursue if elected.

“Go out and look at which candidates are supporting the Equality Act,” Keenan Crow, the director of policy and advocacy at the LGBTQ rights organization One Iowa, told Winterhof in one of her interviews, “Look and see if they have a white paper on LGBTQ Iowans. Get out and see what they’re actually saying.”

Amy Klobuchar: Where does she stand on LGBTQ rights?

John Riley is the local news reporter for Metro Weekly. He can be reached at jriley@metroweekly.com
← Previous Story South Dakota House bans gender-affirming care for trans minors
Next Story → Brooklyn park will be renamed after LGBTQ icon Marsha P. Johnson