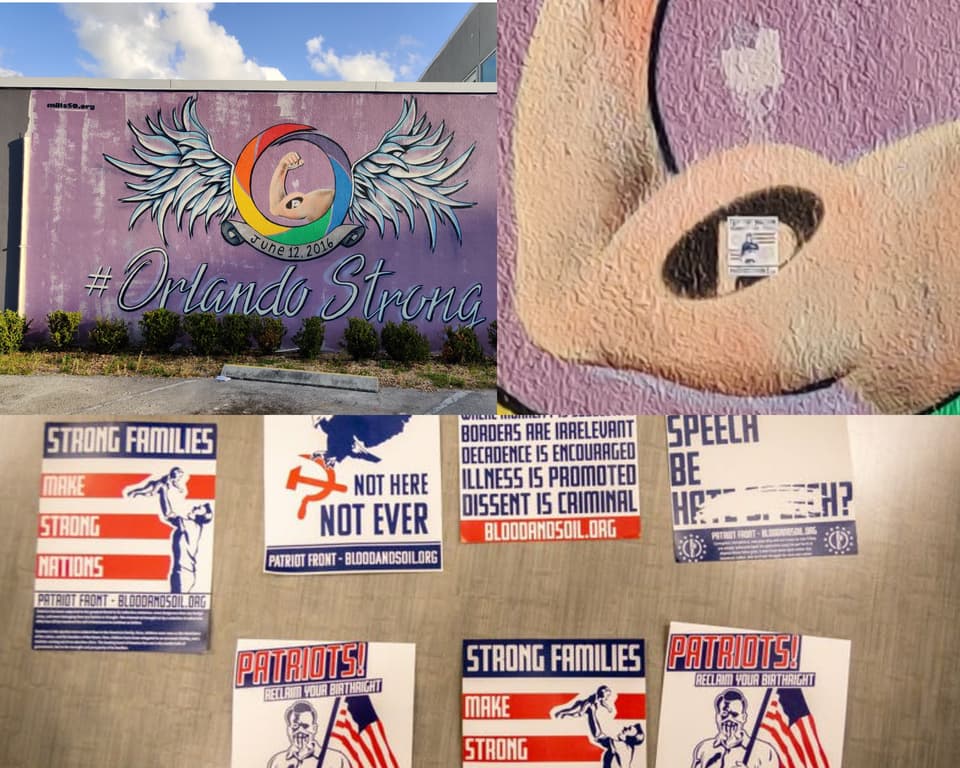 Clockwise from top-left: The Center’s Pulse memorial; A close-up of the Patriot Front sticker; a selection of stickers from the organization — Photos: pauliebleeker / Reddit

A mural dedicated to the victims of the Pulse nightclub shooting was defaced with a sticker from a white nationalist hate group.

The shooting at the LGBTQ nightclub in Orlando, Fla., in 2016 led to the deaths of 49 people — at the time, the deadliest mass shooting by a single gunman in U.S. history.

A sticker by white nationalist group Patriot Front was spotted on the mural, which adorns LGBTQ organization The Center in Orlando, by a user on Reddit, Orlando Weekly reports.

Reddit user pauliebleeker wrote that they were next door to the Center and approached the mural to take a photo when they spotted the sticker.

“I took a picture then noticed something was covering the P,” they wrote. “I walked up and it was a sticker of a man with a gun and an American flag type background. Under it gave a website for the group Patriot Front.”

Patriot Front has been designated a hate group by the Southern Poverty Law Center, which notes that it is “an image-obsessed organization that rehabilitated the explicitly fascist agenda of [neo-Nazi group] Vanguard America with garish patriotism.”

It was founded in 2017, in the wake of the “Unite the Right” rally in Charlottesville, Va., where anti-racist protester Heather Meyer was murdered when white supremacist James Alex Fields Jr. drove his car into a crowd of protesters.

The Reddit user noted that they visited The Center’s Facebook page after identifying the sticker’s origins, “and saw that they were also vandalized today by someone cutting their phone lines.”

“I have messaged them my findings,” they wrote. “Stay safe Orlando and fuck these guys. Rip down any stickers you see like this.”

The Center wrote on Facebook last week that the organization’s phone line was inactive “due to vandalism.”

“Our phone line has been down since yesterday in Orlando due to vandalism. We apologize for any inconvenience. We are still here to serve our community,” The Center wrote. “We hope to have phone lines restored tomorrow. Thank you for your patience.”

The Center later issued a statement on Facebook regarding the Patriot Front sticker, adding that a second sticker was found on the front of the building.

“We are sad to see any hate, especially in Orlando,” the organization wrote. “Sadly, The Center’s Pulse mural had a sticker from a [known] White Supremacist group placed on it. Another sticker was found near the front of the building. We are unclear if the spray-painted tags and the phone/internet lines being cut are related but we are being vigilant. All of Orlando knows that hate never wins.”

Last year, the OnePulse Foundation unveiled the design of a permanent memorial to the Pulse nightclub victims. The Pulse Memorial & Museum will be split over two locations, with a spiraling tower containing a museum and public plazas, and a memorial garden surrounding the nightclub featuring 49 trees to commemorate those who lost their lives.

The design will be further refined with input from survivors and victims’ families, with a targeted opening date of 2022.

6 in 10 LGBTI people in Europe are afraid to hold hands in public, survey says

Rhuaridh Marr is Metro Weekly's managing editor. He can be reached at rmarr@metroweekly.com.
← Previous Story Joe Biden calls conversion therapy ‘sick,’ emphasizes importance of Equality Act
Next Story → Anderson Cooper says being gay is ‘one of the great blessings of my life’