A member of the U.S. Marine Corps has drawn attention for a series of social media posts forcefully defending LGBTQ Marines and the repeal of Don’t Ask, Don’t Tell.

Chief Warrant Officer Bobby Yarbrough, a communications officer at a Marines recruit depot in South Carolina, responded to a number of Facebook commenters who took issue with a post celebrating Pride Month and the end of Don’t Ask, Don’t Tell.

It came after the Marine Corps issued a force-wide statement earlier this month in support of LGBTQ servicemembers and the ten-year anniversary of the repeal of DADT —  a policy that prohibited gay and bisexual people from serving openly — stating that USMC is “committed to living the values we defend and treating everyone equally, and with dignity and respect.”

“This June, Commanders and leaders are encouraged to take time to recognize the 2020 LGBT Pride Month, and promote participation in observance events throughout their local communities,” the statement said.

“This year we celebrate the ten year anniversary of the repeal of ‘Don’t Ask Don’t Tell,'” the post read. “The Marine Corps takes pride in building strength in our diversity.”

This year we celebrate the ten year anniversary of the repeal of “Don’t Ask Don’t Tell”. The Marine Corps takes pride in…

But the post quickly racked up a number of negative and anti-LGBTQ comments from people expressing their dismay at the depot celebrating LGBTQ Marines, or lamenting the end of the anti-gay DADT policy, Marine Corps Times reports.

That in turn led Chief Warrant Officer Bobby Yarbrough to issue a series of rebuttals to the views being expressed. Yarbrough defended LGBTQ servicemembers, called DADT “terrible,” and noted the hypocrisy of those decrying Marine Corps recognition of Pride Month.

“What in the heck is this about?” one commenter wrote. “Is this what the Corps is coming to? A social experiment?”

Yarbrough responded: “Nope. We still fight wars. Some of our warfighters are LGBT. We like them to know we support them.”

“The don’t ask don’t tell worked just fine,” another person wrote, to which Yarbrough replied, “I would imagine all the LGBT that was kicked out of the service would disagree.”

“No heterosexuals were kicked out due to sexuality,” he continued. “The policy was terrible and needed to go away.” 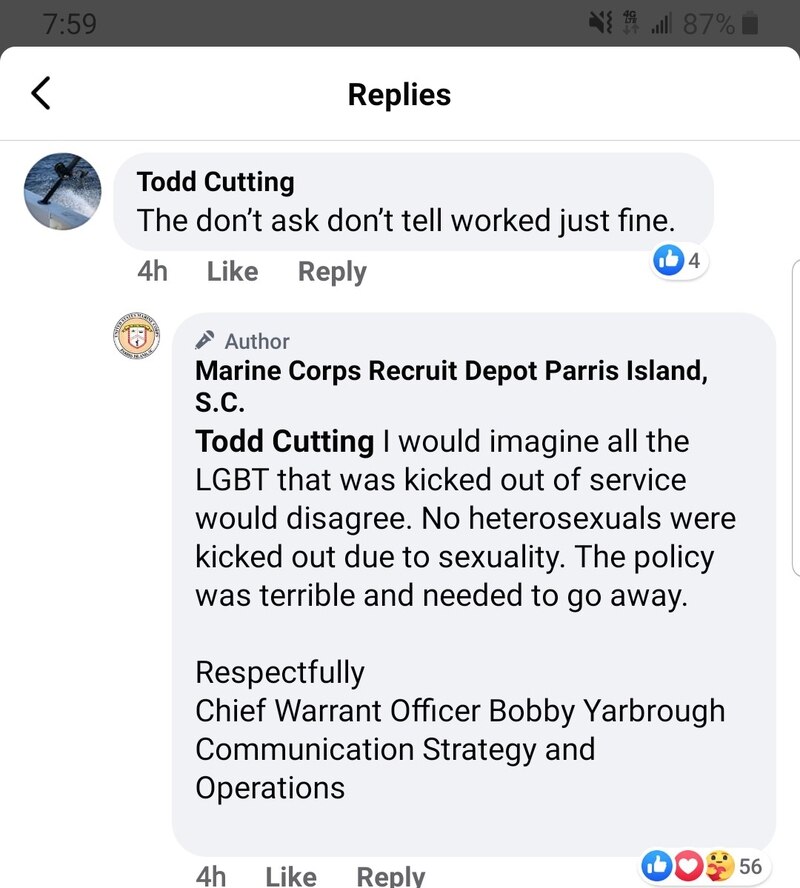 After one commenter called the Pride month post “BS” and said it shouldn’t be “celebrated,” Yarbrough clapped back: “We also celebrate Black History Month, Asian Pacific Heritage Month, Month of the Military Child, etc. Should we stop celebrating those too?”

To a commenter who said the Pride Month post was “totally against my morals and beliefs” and accused the Corps of succumbing to “influences that do not belong,” Yarbrough responded: “No one is asking you do anything but accept them as themselves.”

In one of Yarbrough’s briefest and most effective burns, he replied to a commenter who called the Pride post the the “DUMBEST thing I’ve heard all month!”

“Leave my f****ing Marine Corps alone!” the person wrote. “It was NEVER intended to be a freaking social experiment!”

“This happened 10 years ago,” Yarbrough replied. “Obviously it didn’t break our Marine Corps.” 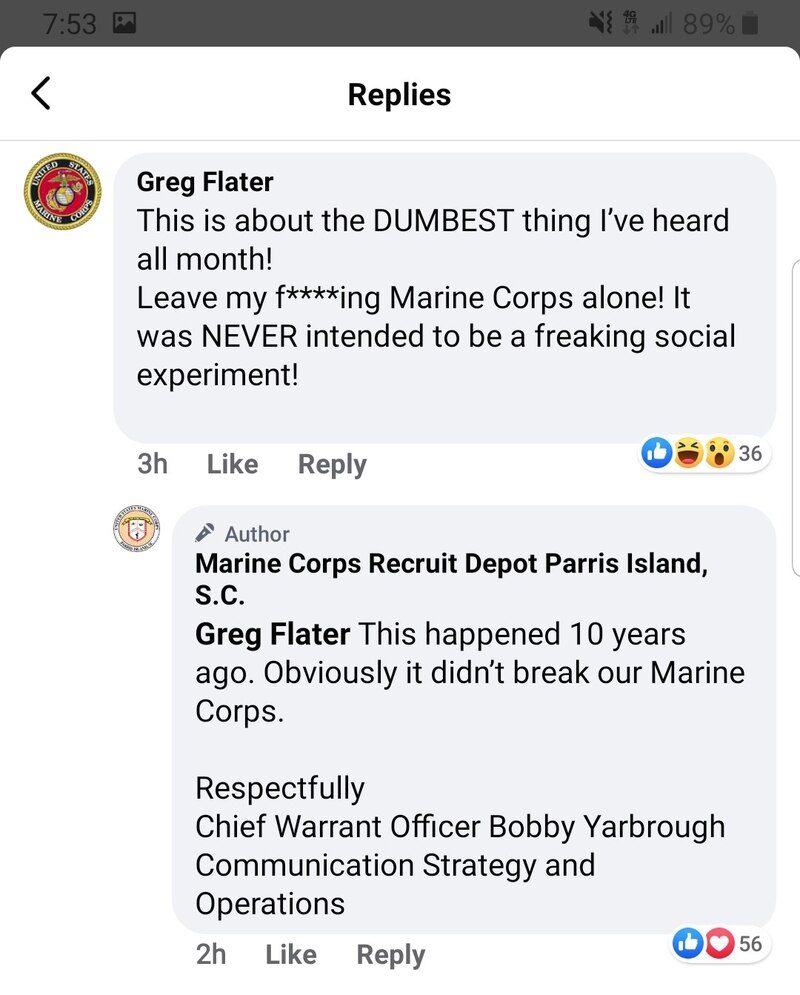 In an email to Marine Corps Times, a Headquarters Marine Corps spokesman said Yarbrough’s comments were in line with Corps’ values.

“Although social media management policies vary between commands, much of the dialogue on this post shows the command responding directly to statements that are not in line with Marine Corps values or current policy,” Capt. Joseph Butterfield said.

Butterfield noted muting or deleting the anti-LGBTQ comments would allow “certain thought processes to go unchallenged,” and said that social media “allows us to engage multiple audiences directly, and sometimes that means disagreeing with members of an audience.”