From DC Latinx Pride to It Gets Better, Let Freedom Sing to Queen of the Capital 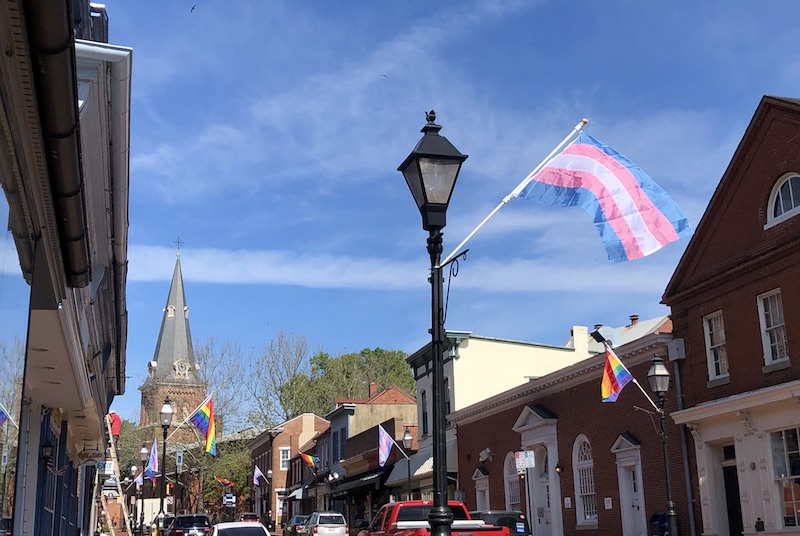 Annapolis Pride hosts a week of virtual events in lieu of in-person celebrations. The city’s streets have been decorated with rainbow Pride and transgender Pride flags to commemorate the annual celebration, which kicks off on Wednesday, June 24 at 8 p.m. with the Singing OUT Virtual Tour, a virtual concert featuring performances from award-winning singer-songwriters Heather Mae and Crys Matthews. On Thursday, June 25, at 4 p.m., the Anne Arundel County Public Library will host “Pride and Centuries of Prejudice,” a virtual educational talk, presented by Dr. Chris Mielke, that examines the history of Maryland and Virginia’s LGBTQ community in the 18th, 19th, and early 20th centuries. Later that evening, at 7 p.m., the American Foundation for Suicide Prevention hosts an informational session on LGBTQ+ suicide prevention. On Saturday, June 27, at 4 p.m., in lieu of a parade or festival, Annapolis Pride hosts a discussion, which will be live-streamed on Facebook, about racism, transphobia, homophobia, and hate in the LGBTQ community. For more information, visit www.annapolispride.org. (John Riley) 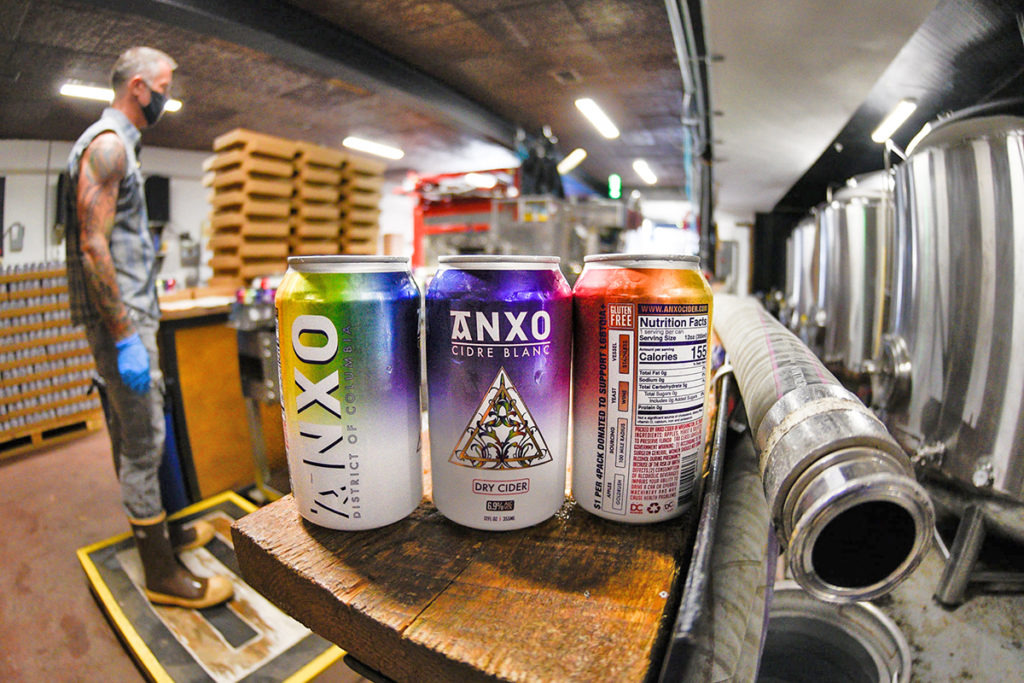 D.C.’S ANXO Cidery toasts Pride this year by putting its flagship product in special cans that will help raise awareness and funds for Casa Ruby. Temporarily rebranded Cidre Blanc Pride, the libation will be packaged in a newly designed rainbow can and sold in a pack of four, with $1 from every purchase going to help the many transgender, genderqueer, gender nonconforming, and queer individuals served by the organization. Inside is the bright and refreshing dry cider made from GoldRush Apples sourced from farmers in Virginia and Pennsylvania, all less than 150 miles away. ANXO aims to raise over $1,000 for Casa Ruby through sales, offered in addition to a donation of $800 the company made to start off Pride month. Available throughout the month of June locally at many liquor stores as well as by same-day delivery, or national delivery to over 40 states by visiting www.anxodc.com. 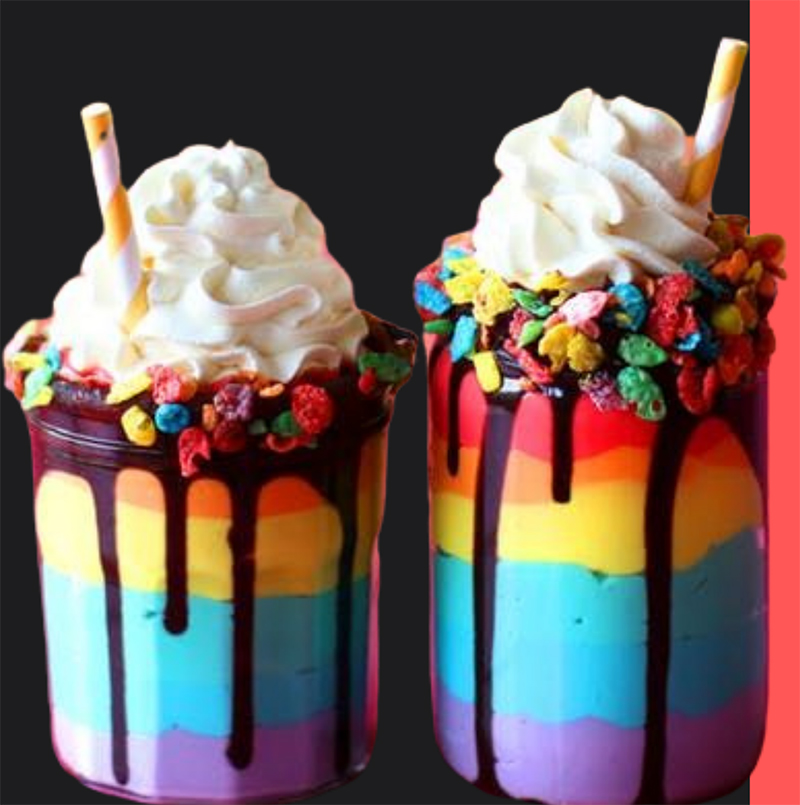 The fast-casual restaurant in Shaw has concocted a blend of vanilla ice cream, food coloring, pixie sticks and sprinkles plus a whipped cream topping. The Wear Your Pride Milkshake costs $5 — or $8 for a boozy boost (unless you visit on Sweet Tooth Sunday and your total sale comes to greater than $15, which will shake loose a 15% discount). Meanwhile, 5% of all milkshake sales will be donated to the Capital Pride Alliance. HalfSmoke is at 651 Florida Ave. NW. Call 202-986-2079 or visit www.halfsmoke.com.

IT GETS BETTER: DIGITAL PRIDE EXPERIENCE

Peppermint, the runner-up on the ninth season of RuPaul’s Drag Race who followed that up with her 2018 Broadway debut in Head Over Heels is particularly busy this Pride month. In addition to New York’s Black Queer Town Hall livestream this weekend alongside Bob the Drag Queen, Peppermint will take on hosting duties for “It Gets Better: A Digital Pride Experience.” Marking the 10th Anniversary of an organization launched by Dan Savage to help inspire young LGBTQpeople struggling with coming out, the three-day event will consist of exclusive live and pre-recorded content from Crystal Methyd, Jujubee, and Rebecca Black, an exercise led by Caleb Marshall (“The Fitness Marshall”), tutorials by social media influencers Louie Castro of YouTube and Benji Krol of TikTok, plus special appearances by Alyson Stoner, The Aces, Nick Lehmann, The Angelinos, and Rob Anderson. Viewers can #ClickIntoPride with streams from It Gets Better’s YouTube, Facebook, and Twitch pages between 5 and 10 p.m. during the evenings of Wednesday, June 24, through Friday, June 26. Visit www.itgetsbetter.org.

Millions of South Koreans tune in regularly to watch some of their favorite foodies and social media stars chew the fat about current events all the while chewing their way through large portions of food. In recent years, American YouTube stars have been feasting on the trend of so-called mukbangs. And now comes a series featuring drag personalities, about COVID-19’s impact on the LGBTQ community, and part of a promotion for Jack Daniel’s Tennessee Fire, a cinnamon-flavored whiskey. The series kicks off on Saturday, June 20, with the stuffing of Patrick Starr, a beauty consultant billed as one of the first “men in makeup” on YouTube. The boozy feeding frenzy continues on subsequent Saturdays with Gia Gunn, a transgender contestant from RuPaul’s Drag Race Season 6 (June 27), Cheyenne Pepper (July 4), and Laganja Estranja (July 11). Visit www.JackFirePride.com. 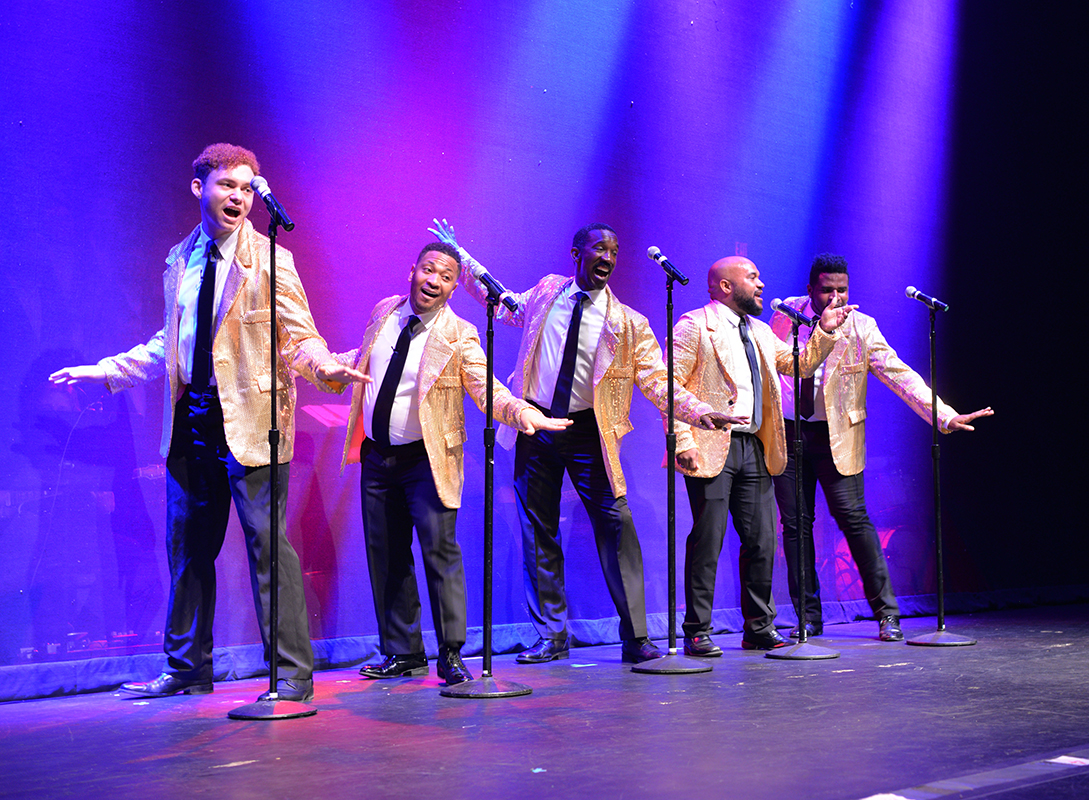 In March 2019, the Gay Men’s Chorus of Washington offered a concert in celebration of African-American influence on music and culture, shared through stories and songs reflecting diverse experiences and shared history. The organization recorded the program, so in lieu of a live Pride-themed concert this year and as a way to show support for the Black community and the #BlackLivesMatter movement through its programming, the chorus is offering free online streams of the full two-plus-hour concert recording throughout the month. A mix of tunes from jazz, gospel, R&B, pop, and Broadway, the program features covers of well-known hits by everyone from Duke Ellington to Prince, Aretha Franklin to Whitney Houston — as well as a stirring performance of the song “Glory” from the movie Selma, featuring soloists Tyrel Brown and Joshwyn Willett. Visit www.youtube.com/GayMensChorusDC.

This year marks a decade since the National Portrait Gallery presented Hide/Seek: Difference and Desire in American Portraiture, touted as the first major museum exhibition to explore issues of sexuality and gender in American art and history. With Hide/Seek, co-curators Jonathan D. Katz and David C. Ward set out to display a range of artworks and artists linked, to varying degrees and in various ways, by same-sex desire and LGBTQ identity. Katz and Ward get a chance to revisit the exhibition, its legacy, and the anti-gay outrage and ensuing censorship controversy it sparked and its legacy as the featured guests of a livestream discussion led by NPG’s Senior Historian Gwendolyn DuBois Shaw, part of the “Smithsonian’s Celebrate Pride” virtual event series. Tuesday, June 23, at 5 p.m. Free but registration required to get Zoom credentials. Visit www.si.edu/events/pride.

The Prince George’s County Memorial Library System, with 19 branch libraries throughout the suburban Maryland county, has been presenting its virtual month-long “Pride at PGCMLS” series. The organization has also unveiled “LGBTQ+ Pride,” a new LGBTQ history and culture webpage with a well-curated collection of informative content, helpful resources, and recommended reads and streaming content — all compiled over the past year by the Library’s LGBTQ+ Working Group of staff and community members. The page will also feature short, personal videos created by LGBTQ-identifying members of the @PGCMLS staff for the global #ItGetsBetter Project. And then there are the details about the crowdsourced Virtual Community Pride Quilt project. Any member of the public can submit “a photo or video clip that describes or documents what pride means to them” for quilt consideration, with submissions accepted until this Friday, June 19 at pr@pgcmls.info. The quilt will go on display on the Library’s website and social media at the end of the month. Visit https://pgcmls.info/pride. 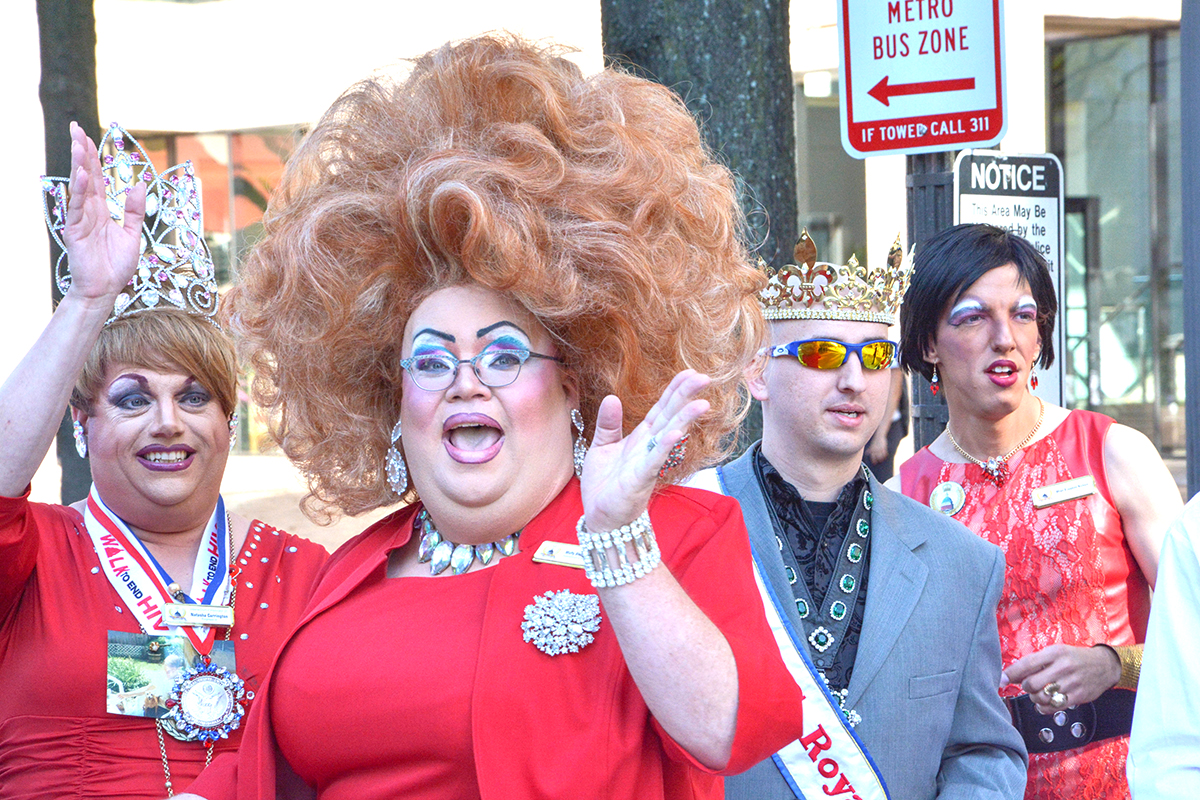 QUEEN OF THE CAPITAL

Featuring the tagline “politics can be a drag,” Josh Davidsburg’s documentary gives viewers a behind-the-scenes look at Muffy Blake Stephyns’ 2014 campaign to become the Empress of the Imperial Court of Washington, D.C., the drag group whose mission is to raise money for local organizations and nonprofits. The 80-minute film, getting a limited, Pride-related national release as part of the Alamo Drafthouse’s On Demand streaming service, offers a primer into the world of drag pageantry and D.C.’s rich drag history. Streaming begins Saturday, June 20, with a virtual Q&A featuring Muffy and the filmmaker Davidsburg planned for Sunday, June 21. A 48-hour rental is $9.99. Visit www.ondemand.drafthouse.com.

Monday Night Trivia has returned to Red Bear Brewing Co. — virtually speaking, that is. William Burlew, better known by his drag name Logan Stone, will host five rounds of trivia, with the top three contestants/teams winning prizes IRL — in other words, physically picked up from the NoMa venue. Next week’s edition, Monday, June 22, starting at 6:45 p.m., is a special two-hour Pride Week to-do. Tickets are $10 and grant the event’s Zoom credentials and Google doc for use during play. Visit www.redbear.beer/store.

This Friday, June 19, starting at 8 p.m., GLOE of the Edlavitch DCJCC presents a virtual Pride Shabbat with Bet Mishpachah, and Nice Jewish Boys and Nice Jewish Girls, and led by Rabbi Jake Singer-Beilin with musician/singer Robyn Helzner. That’s followed the next evening, Saturday, June 20, with a GLOE Virtual Pride Happy Hour & Havdalah starting at 9 p.m. led by Rabbi Adam Rosenwasser of Temple Sinai. Participants are encouraged to show their pride by wearing a solid-colored shirt in their favorite color of the rainbow. Both events are free via Zoom with registered links. Visit www.edcjcc.org/community/gloe.