By John Riley on October 21, 2020 @JohnAndresRiley 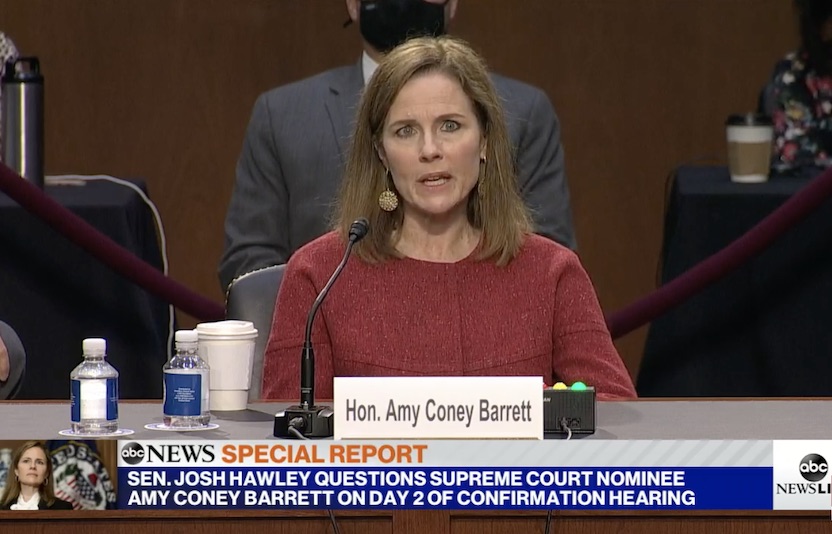 U.S. Supreme Court nominee Amy Coney Barrett served for nearly three years on the board of a network of private Christian schools that barred admission to children of same-sex parents and LGBTQ youth, and discouraged LGBTQ people from working as teachers.

The policies discriminating against LGBTQ people and their children were in place for years at three schools operated by Trinity Schools Inc., both before and during Barrett’s time on the board from 2015-2017, when she was confirmed to a vacancy on the 7th U.S. Circuit Court of Appeals.

The three schools — Trinity School at Meadow View, in Falls Church, Va.; Trinity School at Greenlawn, in South Bend, Ind.; and Trinity School at River Ridge, in Eagan, Minn. — are affiliated with People of Praise, a community comprised mostly of archconservative Roman Catholics who sign a “covenant” pledging love and service to fellow community members and to God.

At least three of Barrett’s children have attended Trinity School at Greenlawn, according to The Associated Press.

People of Praise is not a church, but is part of the Catholic charismatic renewal movement, and organize regular meetings of its members, who each attend their own parishes.

The group’s belief system emphasizes the importance of a personal relationship with Jesus, and may embrace practices such as baptism in the Holy Spirit and speaking in tongues, as well as traditional views of human sexuality.

Barrett was not asked about her longtime membership in People of Praise, her religious beliefs, or her position on the board of Trinity Schools Inc. during her confirmation hearings last week.

But many of those who spoke with the AP — several on background, in order to protect their identities or to avoid backlash — said that even though they would describe Barrett as a “nice” or “kind” person, they also believe her association with People of Praise will influence her decision-making and will lead her to issue rulings hostile to the LGBTQ community.

The AP interviewed more than two dozen individuals who attended or worked at Trinity Schools, or were former members of People of Praise over the past five decades, who claimed that the schools’ leadership regularly communicated and implemented anti-LGBTQ policies and positions in their handbooks and written policies, enrollment and employment agreements, and even in one-on-one conversations, and that such practices occurred during Barrett’s tenure as a trustee.

One of those interviewed, Tom Henry, recounted how when he was serving as a student ambassador during his senior year at Trinity School at River Ridge, he was asked by a lesbian parent whether Trinity was open to gay people and expressed concern about how her child might be treated.

He didn’t know what to say, but later brought the question to Jon Balsbaugh, the headmaster, asking him how he should have answered it.

According to Henry, Balsbaugh pulled a document condemning gay marriage out of his desk drawer, and told Henry — who is gay himself — that it was a new policy from People of Praise that was going into the handbook.

“He looked me right in the eye and said, the next time that happens, you tell them they would not be welcome here,” Henry told the AP. “And he said to me that trans families, gay families, gay students, trans students would not feel welcome at Trinity Schools. And then he said, ‘Do we understand each other?’ And I said, yes. And I left. And then I quit the student ambassadors that day.”

Balsbaugh, now the president of Trinity Schools Inc., said he recalls the conversation differently, but declined to provide details.

He also told the AP in an email that Barrett, when she was on the board of trustees, was not involved in formulating or passing any policies relating to homosexuality, adding that the school did not adopt any new policies regarding LGBTQ employees or students during that time.

But the school’s handbook says the board is responsible for hiring the president and developing “broad institutional polices.”

Balsbaugh also pushed back against accusations that Trinity Schools engage in discrimination.

“Trinity Schools does not unlawfully discriminate with respect to race, color, gender, national origin, age, disability, or other legally protected classifications under applicable law, with respect to the administration of its programs,” he said in an email.

However, federal law does not explicitly protect LGBTQ from discrimination. In addition, the Supreme Court has embraced the “ministerial exception” for religiously-based schools, finding that such educational institutions have the right to fire teachers and employees for failing to abide by the tenets of the religion in question.

That interpretation is based on the premise that teachers are considered “ministers,” even if they do not teach religion, and are not directly involved in the propagation of faith. 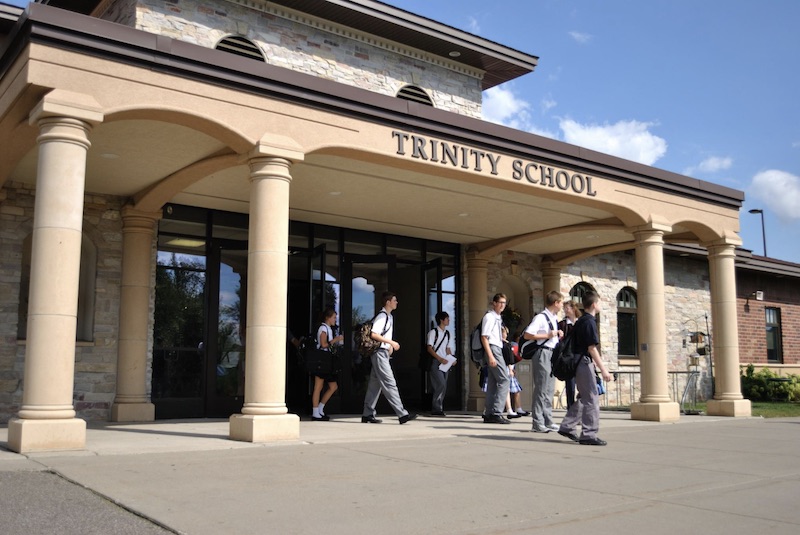 A copy of a 2018-19 enrollment agreement obtained by the AP states that “the only proper place for human sexual activity is marriage, where marriage is a legal and committed relationship between one man and one woman.”

It also says that activities such as “fornication, pornography, adultery and homosexual acts, and advocating or modeling any of these behaviors” are contrary to the school’s core beliefs.

In 2014, the year before Barrett joined the board, the school’s trustees voted to limit admissions to the children of legally married couples or single parents. At the time, gay marriage was not legal in Indiana or Virginia.

“We understand marriage to be a legal and committed relationship between a man and a woman and believe that the only proper place for sexual activity is within these bounds of conjugal love. Outside of marriage so understood, we believe that sexual activity (whether heterosexual or homosexual) is not in keeping with God’s plan for human sexuality,” a section on Trinity’s website reads. “We do not require parents to subscribe to this position, but they should understand that students will encounter it as normative in our Scripture courses, doctrine classes and other courses at Trinity School.”

The school’s website also says it rejects “any form of harassment, bullying, verbal abuse or intimidation,” including harassment “based upon a student’s sex, race, ethnicity, religion, sexuality or perceived sexuality,” saying that such behaviors are antithetical to the spirit of Christianity.

See also: Senator Mazie Hirono: Amy Coney Barrett is a “danger to us on so many fronts”

But other former students say that LGBTQ issues were rarely addressed, and that students who were LGBTQ could be disciplined for the smallest slights.

Michael Leehan, a former student of Trinity School at River Ridge who graduated in 2015, recalled being reprimanded by a dean for hugging a platonic male friend after he came out as gay, saying the dean “got a kind of a mean look in his eye and venom in his voice,” telling him: “Don’t do that stuff here.”

Another former student, speaking on condition of anonymity, claimed he was forced to undergo conversion therapy after Trinity administrators learned he was gay, with a senior People of Praise leader counseling him that his same-sex attraction was “changeable” with treatment and prayer.

However, Sean Connolly, a spokesman for People of Praise, said the group had no knowledge of LGBTQ-identifying youth being referred to conversion therapy, saying it “neither advocates for nor pays for such programs.”

Andrea Turpin-King, who transferred to Trinity School at Greenlawn in 1990, as a seventh grader, told the AP that she had switched schools due to bullying after her father was struck and killed by a drunk driver after leaving a well-known gay bar.

Two years later, in ninth grade, a teacher told her class that all gay people go to hell — something Turpin-King took offense to, challenging the teacher’s statement, who allegedly told the youth that she was also going to hell for defying the school’s beliefs concerning homosexuality.

Cara Wood, who attended Trinity School at Meadow View, said the only time the school addressed homosexuality was when students read Dante’s Inferno and learned about gay men condemned to hell for their sins.

“They called it sexual preference rather than … sexual orientation and typically we just wouldn’t address it at all,” she said.

Barrett drew criticism from Democrats on the Senate Judiciary Committee when she called sexual orientation a “preference,” although she later apologized, saying she did not intend to offend anyone by using the term.

When approached by the AP about Barrett’s associations with People of Praise and Trinity Schools Inc., White House spokesman Judd Deere, who is openly gay, accused the AP of unfairly attacking Barrett.

“Because Democrats and the media are unable to attack Judge Barrett’s sterling qualifications, they have instead turned to pathetic personal attacks on her children’s Christian school, even though the Supreme Court has repeatedly reaffirmed that religious schools are protected by the First Amendment,” Deere said in an email.

GLSEN Executive Director Eliza Byard criticized reports of Trinity’s alleged hostility towards the LGBTQ community and Barrett for her association with Trinity.

“Amy Coney Barrett helped lead schools that taught children and educators to hate themselves in the name of religion,” Byard said. “Such oppressive, overt, and crushing discrimination by a religious school is technically legal, but the fact that Barrett actively participated in enforcement of such discriminatory policies should be disqualifying for a lifetime appointment to do justice for all.

“Even worse, this is not an isolated case of discrimination. GLSEN research shows that LGBTQ+ students in religious schools report the most anti-LGBTQ+ policies and practices, and at least 14% of religious schools actively discriminate against LGBTQ+ students,” Byard added. “It is time for every school leader to recognize that following principles of faith means respecting the dignity and safety of all children.”

John Riley is the local news reporter for Metro Weekly. He can be reached at jriley@metroweekly.com
← Previous Story Transgender male employee sues Sweetgreen for sexual harassment and discrimination
Next Story → LGBTQ teen ‘overwhelmed’ with positive messages after being kicked out of church group