By John Riley on October 13, 2020 @JohnAndresRiley 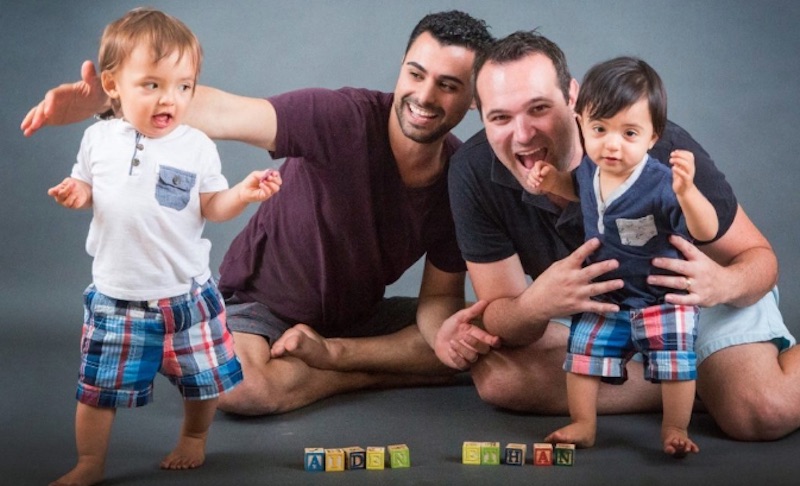 Elad and Andrew Dvash-Banks and their sons – Photo: Immigration Equality

In yet another blow to the Trump administration, a federal appeals court ruled that one of two twin boys born abroad via surrogacy to a gay married couple is a U.S. citizen.

The 9th U.S. Circuit Court of Appeals ruled against the U.S. State Department last Friday, finding that 4-year-old Ethan Dvash-Banks is an American citizen, despite being conceived by the sperm of an Israeli father and born in Canada using a surrogate mother.

Ethan and his twin, Aiden, were conceived with donor eggs and carried to term by the same surrogate before being born in September 2016 in Ontario, Canada. Andrew Dvash-Banks, an American citizen, fathered Aiden, while Elad, an Israeli national who is legally married to Andrew, fathered Ethan.

But the U.S. State Department — in both this and in at least two other cases — has denied citizenship to the children of same-sex couples born abroad because it does not recognize the parents’ marriages as legally valid.

Had Andrew and Elad been a heterosexual couple, the State Department would have recognized their marriage as legal, and thus, would have granted citizenship to any of their children, even if the children were born via surrogacy and did not have biological ties to both parents.

In siding with the Dvash-Banks family, the 9th Circuit upheld the finding of a lower district court judge who ruled that the State Department had erred in denying citizenship to Ethan.

Rather, simply the fact that Andrew and Elad were married should have been enough to recognize their sons as U.S. citizens, because U.S. law only requires evidence of a biological relationship to a parent in cases where a child is born “out of wedlock.”

Andrew Dvash-Banks told The Associated Press that he was “thrilled” by the ruling, and feels more relieved that his son’s citizenship has been upheld in court.

While the twins are still too young to understand the uncertainty over Ethan’s citizenship status, Andrew and Elad set up email accounts to create a “digital journal” that the twins can read when they are older. Dvash-Banks said he planned to email the twins a copy of the ruling.

“We want both to know how much we love then and how much we fight for them,” he said. “The fact that they’re twins and not being treated equally, we want them to know that we did everything to make that right and we were successful.”

Federal judges have also ruled in favor of two other same-sex couples: one in Georgia, and another in Maryland, whose daughters were also denied citizenship because the State Department refuses to recognize same-sex marriages as valid and, thus, does not recognize LGBTQ people’s parental rights to their own children.

“After years of the federal government denying Andrew and Elad’s rights as a married couple, the 9th Circuit has unequivocally ruled in the family’s favor,” Aaron Morris, the executive director of Immigration Equality and co-counsel for the Dvash-Banks family, said in a statement. “No longer will these parents have to worry that their twin sons will be treated as if they were born out of wedlock simply because they have two fathers. This decision demonstrates yet again that it is far past time for the State Department to change its discriminatory policy.”