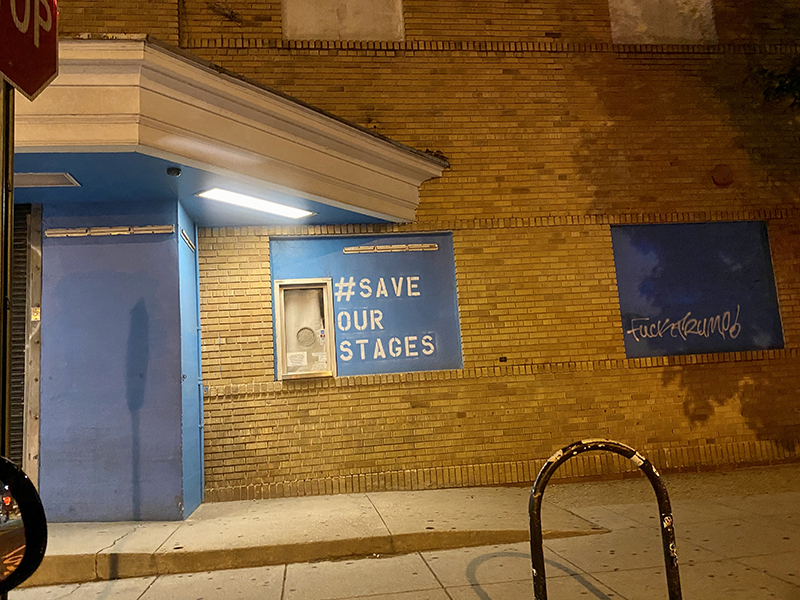 The owner of the Minneapolis club where Prince first got his start reached out to D.C.’s I.M.P. Productions with a specific request.

“Hey Audrey, you’re in Washington,” Dayna Frank texted I.M.P.’s Audrey Fix Schaefer. “Do you know any lobbyists? Because we’re going to have to lobby the federal government or we’re all going to go under.”

A few weeks into the start of the COVID-19 pandemic, the nation’s independent music venue owners — including Frank of Minnesota’s First Avenue — were beside themselves. Schaefer describes them as an unflappable, seasoned bunch of mavericks who were “always used to doing it on their own [and who] have been able to survive against so many odds in the past.” But with their businesses forced to close until further notice, they were feeling “very frightened” — enough that they started reaching out to each other for help, most for the first time, asking, “What are you doing about your employees? What about your bills? What about your insurance?”

“To be completely shut with no income, high overhead, and no understanding of when we’re going to get to reopen, we figured we better get on it and figure out how to lobby Congress,” Schaefer says. “Otherwise, we can’t survive.”

Within days, the first-ever association for independent venues, promoters, and festivals was born. By the end of the first week, the National Independent Venue Association registered 350 members. Today, they’re up to 2,800 from “every single state in the union and D.C.,” says Schaefer, who serves as director of communications for NIVA — currently an all-volunteer-run entity. She works in the same capacity for I.M.P, the nationally-revered local collection of venues that includes industry standard-bearer the 9:30 Club, as well as The Anthem, the Lincoln Theatre, and Merriweather Post Pavilion.

Shortly after formation, NIVA surveyed its members about the future, and the results were dire but clear: “If the shutdown lasts six months or longer and there’s no meaningful federal support, 90 percent said that they would fold permanently.”

Music venues are not the only businesses struggling to make it through the pandemic, of course. But according to a recent survey from the U.S. Chamber of Commerce, nearly 90 percent of all businesses originally closed as a result of the pandemic have by now reopened, at least partially. “We’re not among them,” Schaefer says bluntly, pointing out that Congress has “helped so many other industries” suffering through the pandemic. “So now it’s time to focus on us, especially since we can be part of the economic renewal when it is safe for us to open up.” She cites a study released in 2019 showing that for every dollar spent at a small music venue, $12 was generated in economic activity for area businesses, including restaurants, bars, hotels, and transportation providers.

“If [congress] callously and negligently [doesn’t] pass a bill for the good of the entire country, there will be a mass collapse of independent music venues across the country.” — Audrey Fix Schaefer

Unlike restaurants and even many bars, most music venues will stay closed indefinitely — effectively at the mercy of the government, and part of most localities’ final reopening phase. Schaefer likens the situation to that of eminent domain: “When the government decides that the highway needs to go through your backyard, it’s for the greater good for it to go through your backyard. So they take your property and pay you fair market value. Well, this is an instance in which, for the greater good, they have taken our property effectively by shutting us down for health and safety reasons — which we totally understand. But they’re leaving us hanging out to dry, as though there’s some type of a miracle that will happen to our bottom line that makes us not have to pay rent and mortgage and utilities and taxes and insurance. But we do and the overhead is phenomenal.”

Through its Save Our Stages campaign, NIVA has been sounding the alarm about the need for federal assistance in order to keep music venues afloat while waiting out the pandemic. There are other advocates also working to drum up industry support at the local and state level, including Chris Naoum of Listen Local First D.C. and Aaron Myers of the Capitol Hill Jazz Foundation, who are leading a campaign urging DC Mayor Muriel Bowser and DC Councilmembers to provide emergency support for local businesses through a proposed Music Venue Relief Act.

Such support might have helped the 18th Street Lounge and Twins Jazz hold on, but instead both celebrated, decades-old D.C. institutions recently announced that they have shut their doors for the final time. Sadly, any day now we’re sure to hear of more closures if no support materializes, given that we’ve now passed the pandemic’s six-month mark, or the benchmark identified in NIVA’s membership survey. “Venues cannot hold on any longer,” Schaefer stresses. “It’s no joke: Venues are closing faster.”

Schaefer has been heartened by the level of support the Save Our Stages campaign has registered, among music fans — who are writing letters to their elected officials as well as enlisting their friends and family members in the cause — as well as legislators. NIVA has been instrumental in the development of three pieces of Congressional legislation, including an act named after the campaign and led by Senators John Cornyn (R-Tex.) and Amy Klobuchar (D-Minn.) and Representatives Peter Welch (D-Vt.) and Roger Williams (R-Tex.). The Save Our Stages Act also attracted a whopping 144 co-sponsors from both parties. And yet, all those bills have been held up for months, the result of partisan squabbling over the details of any future COVID-19 relief package.

“What they need is public outcry to tell them: Do your job!” says Schaefer, struggling mightily not to swear while recounting how the summer played out.

“We were told that, ‘Oh, of course they’re going to pass the next COVID bill before they leave for the July 4th break.’ They did not. And then we heard, ‘Oh, of course they’re going to pass something before they leave for the August recess. They did not. They went on break.” And now? With each day bringing us closer to the election, passage of any relief before November looks less and less likely. “Every day that they wait, I get another email or three about venues going under across the country.”

Schaefer sighs. “If they callously and negligently don’t pass a bill for the good of the entire country, there will be a mass collapse of independent music venues across the country, have no doubt. This is not a drill. This is reality. And they cannot come back, three months from now, and do it. It would be like if you’re on the organ transplant waiting list, and they find a match for you two days after your funeral — it does nothing.”

For more information on the National Independent Venue Association and to participate in its #SaveOurStages campaign, visit www.nivassoc.org or search for @nivassoc on social media.