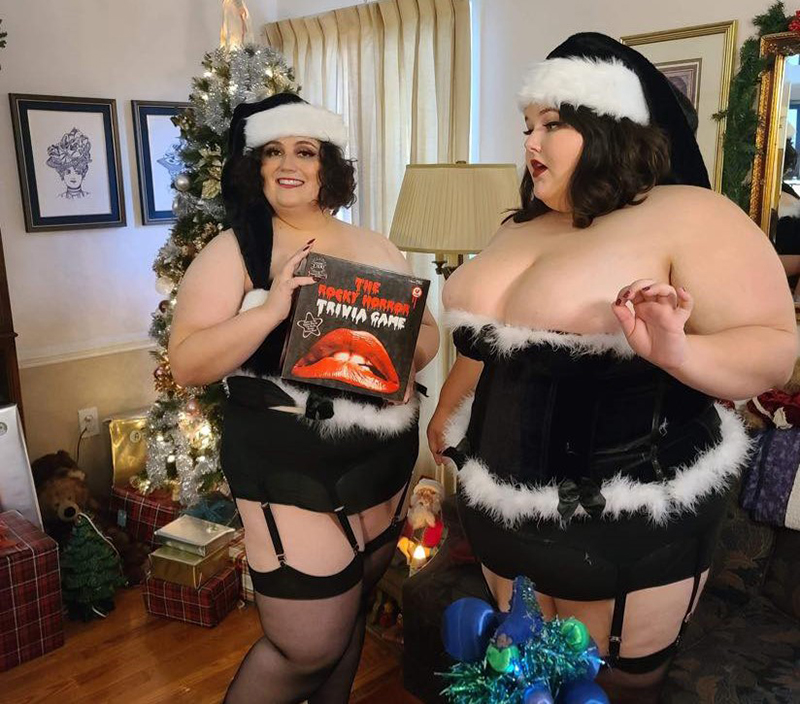 As a teenager who felt out of step with her peers, Leandra Lynn got a much-needed jolt of connection from The Rocky Horror Picture Show.

“I had just had knee surgery,” she says, “and I was using a cane, and I just felt weird, like I didn’t fit in anywhere.” Her father, an avid Rocky Horror fan (he owned one of the first VHS tapes of the campy 1975 film), felt he could help. He sought out a live midnight showing of the film — complete with a front-of-the-screen reenactment — in their hometown of Fairfax, Va. and said to his daughter: “Let’s go to this place where there are a lot of people who don’t feel like they quite fit in.” Leandra Lynn was hooked.

A few years later, a 17-year-old Lynn joined a local “shadowcast,” the term for the dozen or so fans who act out as an ensemble during interactive Rocky Horror screenings. The 33-year-old now leads D.C.’s Sonic Transducers shadowcast alongside the man she married earlier this year, Dan Clark. “[Rocky Horror] has given me a fantastic outlet for expressing myself, for being kind of a very truthful version of myself,” says Lynn, who identifies as bisexual. “The most real version of me that’s unfiltered is at Rocky.”

It’s now been nine months and counting since Lynn and the Sonic Transducers have been able to perform at their longtime home, Landmark’s E Street Cinema, temporarily shuttered due to the pandemic. At the time, no one expected the March edition of their second-weekend monthly show schedule would be the last of 2020.

“I would email our theater manager once a month and go, ‘Hey, how’s it looking for this month?'” she says. “And he’d go, ‘Not great. Try again next month.’ We did that up through August before he said, ‘I don’t think that you need to worry about whether or not you have a cast ready for Halloween.’ That was heartbreaking.”

“Halloween is such a big thing,” says fellow Sonic Transducer cast member Kelly Hanson. “It’s like Christmas for Rocky. So that was when it really sunk in for me how long it had been since we did it.” Like Lynn, Hanson identifies as bisexual, and also grew up in the area going to Rocky Horror screenings, just one among a gaggle of teenage classmates and friends, most of whom were queer.

As it happens, Lynn and Hanson found themselves every bit as immersed in the universe of Rocky Horror this Halloween as any year before, as the hosts of a new podcast devoted to every single minute of the movie. Hanson had been trying to sell Lynn on her idea for a Rocky Horror podcast long before the pandemic started. “I’m a big fan of a podcast called “Star Wars Minute” that’s been going on for years,” Hanson says. “They sort of invented the minute-by-minute movie format for podcasts. And there are hundreds of minute-by-minute podcasts by now, but no one had done Rocky. I thought that was crazy. There’s so much to talk about with the film. It’s perfect for that format.”

Launched in September, the “Rocky Horror Minute” podcast analyzes the film by focusing on 60 seconds per episode, released in sequential order. With an average of two new episodes a week, they’ve covered nearly the first quarter of the film’s official runtime. They expect it to take almost a year to get to the final episode and the last filmed minute. The episodes vary in length, depending on how much transpires in the minute in question — with a focus not just on what is projected on screen but also how the audience at a live screening would react.

They’ve managed to recruit a few special guests for select episodes, including an upcoming Christmas special in which actor Barry Bostwick — Brad — plays Santa. That edition of the podcast drops on Christmas Day, Dec. 25. “There’s a lot of music in that, a couple of skits,” Lynn says. “We’re really trying to go for kind of a 1970s variety show theme.” The pair also recently did a livestream in which they shared answers to questions emailed to the show’s creator, Richard O’Brien.

While they look forward to being able to return to shadowcasting next year once it’s safe, Lynn and Hanson don’t plan to stop the podcast next fall once they wrap Rocky. And they are already in serious discussions about which movies they’ll deconstruct in subsequent seasons, with Brian DePalma’s Phantom of the Paradise and Jim Henson’s Labyrinth starring David Bowie among the leading contenders.

For now, however, the podcast, “is definitely scratching that Rocky itch for us,” Hanson says. “It feels like I’m making something again.” For her part, Lynn expresses gratitude to Hanson for pushing her to do this. “I’m happy that she did, because this has really given me a lot of joy, and it’s given me something to do instead of just waiting.”

The “Rocky Horror Minute” is available at www.rockyhorrorminute.com.