30-year-old state representative is trying to cast himself as the candidate most concerned with the needs of working people.

Malcolm Kenyatta, a state representative from Philadelphia and one of several candidates seeking Pennsylvania’s U.S. Senate seat in 2022, has secured the endorsement of LGBTQ Victory Fund, the national organization dedicated to electing out LGBTQ individuals to office.

Kenyatta, 30, is a progressive-leaning state representative who is styling himself as the candidate of “working people,” pointing to his real-world experience and advocacy for the downtrodden and vulnerable as evidence. During his time in Harrisburg, he has spoken up against the Republican-dominated General Assembly’s actions, even receiving boos from his GOP colleagues for calling out efforts to cut social safety net programs, place additional restrictions on how people vote, and block progressive legislation, such as bills that would increase the minimum wage or extend legal protections to LGBTQ individuals.

Kenyatta has also been critical of state and national Democratic leaders, arguing that for the party to be considered the working people’s party, it can’t “just have a list of talking points,” but must follow through on campaign promises with effective policy.

“I’m kind of sick of waiting around for career politicians — who will tell you how much experience they have, how great they are, and how much they care about the needs of working people — to actually do something,” he told City & State PA, a news media organization dedicated to coverage of Pennsylvania politics.

Kenyatta faces seven declared opponents in the Democratic primary, including Lt. Gov. John Fetterman, State Sen. Sharif Street, and Val Arkoosh, a physician and chair of the Montgomery County Board of Commissioners. U.S. Rep. Conor Lamb is rumored to be considering a bid for the seat. The seat’s current incumbent, U.S. Sen. Pat Toomey, is not running for re-election, setting up what portends to be a nasty fight for the Republican nomination and a highly competitive general election.

Kenyatta has previously been endorsed by The Working Families Party, the American Federation of Teachers, Democracy for America, and Out Magazine, as well as former Braddock Mayor Chardaé Jones, whom Fetterman succeeded as mayor before running successfully for statewide office.

If elected, Kenyatta would become the first out gay man and first out LGBTQ person of color to ever serve in the U.S. Senate, and just the twelfth Black U.S. Senator in history. He would take office at 32 years old, making him one of the youngest U.S. senators ever.

“We need more people of color, young people, and LGBTQ people influencing the decisions that will determine our country’s future — and Malcolm can prove that even swing states will elect these next generation leaders. His story and values resonate with working families and marginalized communities too often ignored by our political system and he will excite the electorate in ways his primary opponents cannot,” Annise Parker, the president and CEO of LGBTQ Victory Fund, said in a statement announcing the endorsement.

“Malcolm represents the change Pennsylvanians are demanding from Washington — and as he knocks on more doors and speaks with more voters, he will become a favorite to win.”

LGBTQ Victory Fund’s endorsement is significant, because the organization requires candidates to demonstrate they are viable candidates and capable of raising the necessary funds to seek office — in addition to supporting the expansion of LGBTQ rights and access to reproductive health care — before earning a nod from the organization.

By endorsing Kenyatta, who may face other Democrats with a significantly larger degree of name recognition, LGBTQ Victory Fund is sending a message to individual donors and party elites that they believe Kenyatta is a viable candidate for the general election, when the seat will be one of the most contested in the country.

Victory Fund’s endorsement may also give some Washington Democrats — particularly the Democratic Senatorial Campaign Committee — pause before intervening in the race. The DSCC has been fiercely criticized in past election cycles for endorsing so-called “moderates” who fit a particular demographic profile but pursue cautious, dull campaigns, rather than AOC-style progressives who galvanize the party’s base, or politically-moderate-but-fiery-populists who unapologetically embrace their party label and harken back to the days when Democrats enjoyed large majorities in Congress under liberal Speakers like former Reps. Tip O’Neill, Jim Wright, and Tom Foley. (Many of those DSCC-endorsed candidates who were criticized the most ultimately lost, except in heavily-Democratic or states that have begun to trend leftward politically.)

Kenyatta thanked LGBTQ Victory Fund for its endorsement in the race, saying he was honored to receive it.

“Our campaign continues to bring together authentic voices of real people to power this historic campaign. To be the first openly LGBTQ person of color to serve Pennsylvania in the U.S. Senate would be the honor of a lifetime but the fact that I would be the first speaks to the lack of diversity that permeates the Senate’s history,” he said in. a statement.

“The support of Victory Fund is another example of the building momentum for our campaign. In the Senate I will help lead the charge to pass the Equality Act, ban conversion abuse, and end the structures that allow systemic poverty to continue an issue that impacts LGBTQ individuals at higher rates. I’m ready to make history and so are the people of the commonwealth.”

Influencer Christian Walker, who says he is "attracted to men," unloads after claims that his father paid for a girlfriend's abortion drop. 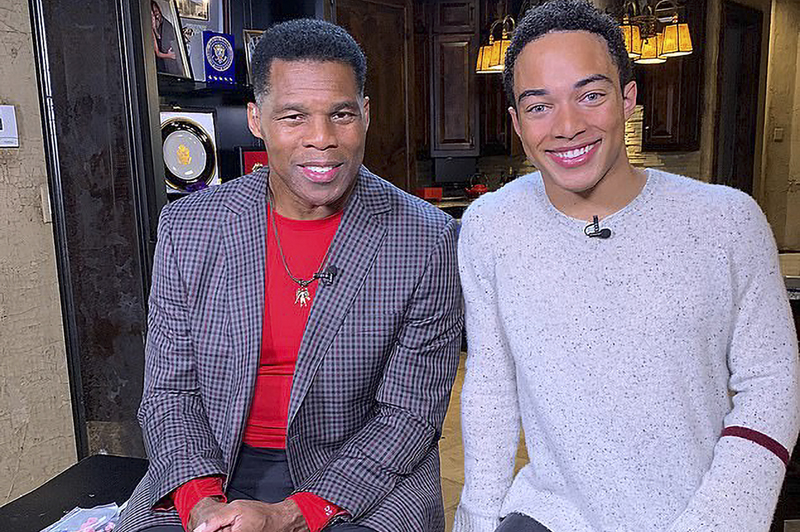 Christian Walker, the son of Georgia's Republican U.S. Senate nominee Herschel Walker and a social media influencer, criticized his father after a Daily Beast story dropped alleging that the elder Walker had once reimbursed his girlfriend for having an abortion.

"Family values, people? He has four kids, four different women, wasn’t in the house raising one of them,” Christian Walker, the 23-year old son of Herschel Walker and Cindy DeAngelis Grossman, who are no longer married, said in a tweeted video. "He was out having sex with other women. Do you care about family values?"