New York Congressman Ritchie Torres (D) introduced a bill earlier this month to require air travelers to be vaccinated against COVID-19 before they are allowed to board domestic and international flights embarking from or arriving in the United States.

Under Torres’ bill, the Secretary of Homeland Security would be directed to ensure that “any individual traveling on a flight that departs from or arrives to an airport inside the United States or a territory of the United States is fully vaccinated against COVID-19,” and tasks the Secretary with granting exceptions for individuals who are ineligible for vaccination, such as young children, or medically unable to be fully vaccinated.

The act defines “fully vaccinated” as “receiving all recommended doses of a COVID–19 vaccine that is licensed under section 351 of the Public Health Service Act or authorized for emergency use under section 564 of the Federal Food, Drug, and Cosmetic Act.”

According to federal data from the Centers for Disease Control and Prevention, more than one-quarter, or 26.9%, of adults over the age of 18 have not received a single COVID-19 vaccine dose.

Additionally, with evidence showing that the highly contagious delta variant is transmissible by even people who are vaccinated, Torres believes it’s a threat to allow people who are unvaccinated — and thus, more susceptible to becoming infected and spreading the virus to others — to travel on planes, which force people to sit in close quarters for extended periods of time.

“The TSA never allows people to enter planes or airports with a weapon, and the delta variant is a weapon,” Torres, the vice chair of the House Homeland Security Committee, told the New York Daily News in an interview earlier this month. “It is a threat to everyone in an airport and everyone on a plane.”

A survey published in June by the Kaiser Family Foundation found that 41% of respondents who were considering getting vaccinated said they would be more likely to do so if they were required to be vaccinated in order to travel on airplanes. Currently, passengers on domestic flights are only required to wear masks.

In a letter sent to the Transportation Security Administration and the U.S. Department of Homeland Security, which has authority over the TSA, described his proposed vaccine mandate as a “commonsense step.”

“These vaccines are clearly safe and effective,” Torres wrote in the letter. “A vaccine mandate would encourage more Americans to get vaccinated, which will save many more lives.”

In response to an inquiry from the Daily News, Torres said he was encouraging DHS and the TSA to take administrative action to require air travelers be vaccinated as soon as possible, because of the length of time — including any possible delays — it would take to pass any legislation imposing a similar mandate.

Reuters reported earlier this month that the Biden administration has been developing a plan to require vaccinations for almost all foreign travelers entering the United States, but Torres’ proposal would go further in extending that to U.S. citizens.

President Biden previously announced last month that federal workers will be required to sign forms attesting they’ve been vaccinated against COVID-19 or will otherwise be forced to comply with new rules that include mandatory masking, weekly testing, and social distancing, among other recommendations. This week, Biden urged businesses and schools to implement vaccine mandates for their workers following the Food and Drug Administration’s approval of Pfizer’s two-dose vaccine for people aged 16 and older.

Speaking with New York’s CW affiliate WPIX, Torres clarified that he is not seeking a universal vaccine mandate, but rather a targeted mandate for certain circumstances or select settings, such as when traveling by air or gathering in large crowds. But he largely feels that if people can get vaccinated — and aren’t among the few who would require a medical exception — they should.

“We’ve seen the limitations of voluntary vaccination in the United States and in New York City. The majority of Americans are not yet fully vaccinated,” he said. Only fifty-five percent of New Yorkers are fully vaccinated, and a majority of people in the Bronx are not vaccinated. So as Albert Einstein once said, ‘If we do the same thing over and over again and expect a different result, that’s the definition of insanity.’ We have to pursue mandates in some form.”

Torres added that he introduced his bill in response to the findings from the aforementioned Kaiser survey examining the attitudes of the vaccine hesitant.

“The Kaiser survey was crystal clear that requiring vaccination as a condition for air travel would substantially raise the likelihood of vaccination among the hesitant,” he noted.

NGLCC and Grubhub and giving $2 million to help LGBTQ businesses rebound from the pandemic.

By John Riley on December 1, 2021 @JohnAndresRiley

The National LGBT Chamber of Commerce, a pro-business advocacy group representing LGBTQ-owned and -operated businesses, in conjunction with food delivery giant Grubhub, recently honored Pitchers/A League of Her Own as one of three establishments receiving $100,000 through their joint Community Impact Grant Program.

The program, started earlier this year to help LGBTQ-owned businesses recoup money lost to shutdowns and other restrictions imposed as part of the COVID-19 pandemic, seeks to assist businesses with grants ranging from $5,000 to $100,000, based on an establishment's individual need and circumstances. 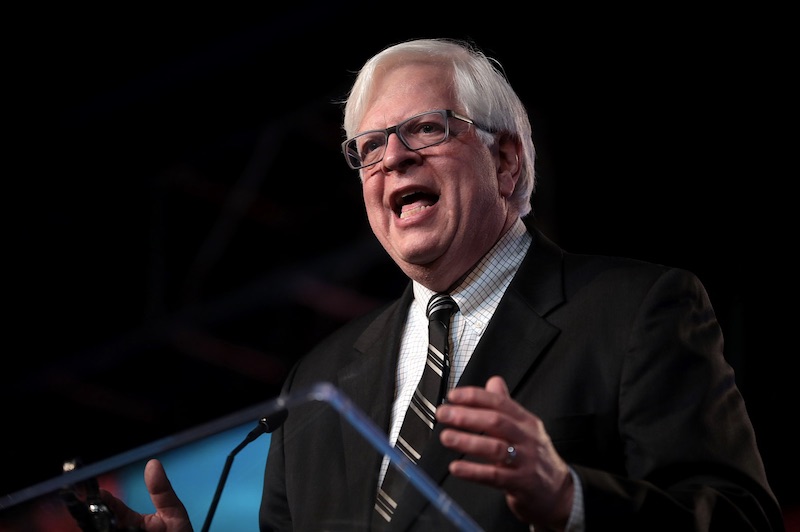 Dennis Prager, the conservative nationally syndicated talk show host, recently claimed that people who choose to remain unvaccinated for COVID-19 are being treated worse than gay men during the early years of the AIDS epidemic.

Prager, who appeared on Newsmax on Monday to rant about rising gas prices and attack the Biden administration's plans to reduce reliance on fossil fuels in order to address climate change, segued into a harangue on the U.S. government being run based on "irrational fears," such as the fear of extinction of the planet or the fear of contracting or spreading COVID-19.