A school board in Texas will soon decide whether to fire a teacher removed from school last year for placing rainbow stickers on her classroom door to signal it as a “safe space” for LGBTQ students.

While several teachers had initially put up the rainbow-colored “safe space” stickers, Rachael Stonecipher, the only publicly “out” teacher at MacArthur High School in Irving, Texas, was one of two removed from the classroom after running afoul of a school district policy prohibiting educators from “us[ing] the classroom to transmit personal beliefs regarding political to sectarian issues.”

“In Irving ISD, our campuses are a safe zone for all students,” Irving Independent School District said in the statement issued in response to Stonecipher’s suspension. “To ensure that all students feel safe regardless of background or identity, the district has developed guidelines to ensure that posters, banners and stickers placed in classrooms, hallways or offices are curriculum-driven and neutral in viewpoint.”

At the time, Stonecipher, an English and journalism teacher who sponsors the school’s Gender and Sexuality Alliance, had argued that “safe space” stickers are not inherently political, but simply signal that a teacher feels confident to have conversations with LGBTQ students who may be struggling with their identity or their sense of belonging.

She also noted that there was a lot of “hurt, confusion, and ear from students who feel like the administration has a problem with them for being LGBTQ+.”

Following Stonecipher’s removal from the classroom, hundreds of MacArthur High School students walked out of class to protest what they saw as discrimination directed against LGBTQ students and staff.

The students wore heart-shaped rainbow stickers on their faces and denounced what they saw as “interrogations” of students called into the principal’s office for their involvement with the school’s GSA.

Now, a year later, Irving ISD officials must decide whether to fire Stonecipher, who, following her removal, was ultimately transferred to another school, where she was once again removed from the classroom earlier this month.

Board trustees met in a closed session earlier this week to discuss the matter, but did not announce a final decision, reports The Dallas Morning News.

Prior to the session, more than 30 supporters of Stonecipher rallied in the Irving ISD administration parking lot holding signs with messages like “Support inclusive teachers” and “Firing excellent teachers is the wrong lesson.”

But Irving ISD has stood by its decision, claiming that the stickers were part of a “personal agenda.”

“Labeling certain classrooms as safe havens for certain groups could communicate to students who do not see themselves reflected in that classroom’s decorations that they are unwanted or unsafe in those rooms,” the district said in a statement.

Stonecipher challenged the district’s justification for removing her from the classroom as bunk.

“Those stickers were not endangering students,” she told the North Texas-based PBS affiliate KERA. “We have no evidence that they ever endangered or made students feel unsafe, ever. What did feel unsafe was when they came down.”

She told KERA she expects to receive notice that she’s been terminated sometime this week. 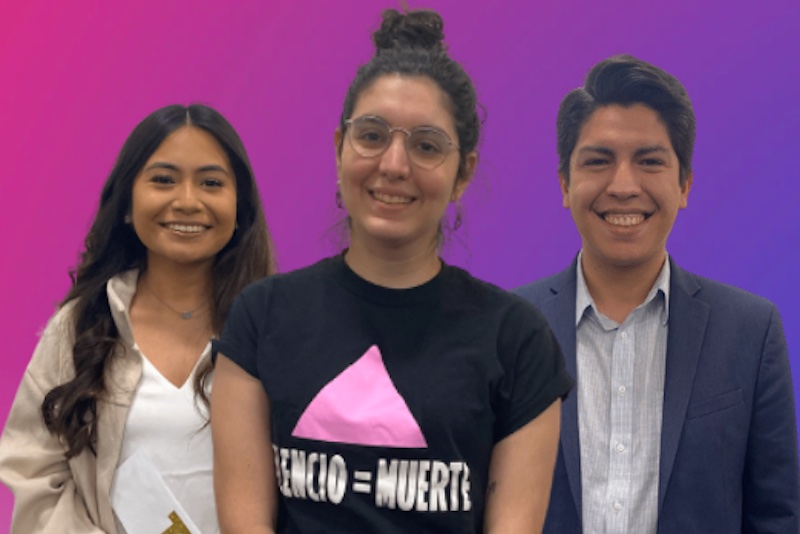 Last month, LULAC Lambda, the local LGBTQ and Latinx advocacy organization, honored three college students as part of its annual scholarship program, which is intended to help those pursuing higher education cover some of their expenses without incurring additional student loan debt.

Scholarship recipients are chosen based on their stellar academic performance, as well as their record of community service or work on behalf of social justice causes. The scholarships were made available through a grant from the now-shuttered BHT Foundation, which allowed LULAC Lambda to award the scholarships at a time when fundraising efforts dried up due to the COVID-19 pandemic.