“Facebook and its parent company Meta had eagerly promoted Pride Month, adding Pride features on the platform, claiming to amplify LGBTQ creators, and reiterating the company’s supposed commitment to supporting LGBTQ people and to eliminating hate speech targeting them,” the report reads. “But Facebook has regularly failed to remove the dangerous and dehumanizing hate speech and misinformation targeting LGBTQ people coming from right-wing outlets, figures, and groups.”

A large amount of the hateful posts were made by right-wing media outlets, the study found. Over 40% of these posts were coming from three pages alone: The Blaze, The Western Journal, and The Daily Wire — all conservative outlets that frequently criticize recognition of LGBTQ rights, especially transgender rights.

According the Media Matters, the sites would post a story with an anti-LGBTQ slant or sensationalizing certain developments related to LGBTQ issues, which would then be picked up by smaller right-wing accounts, giving it more exposure and interactions. The pages also utilized right-wing celebrities like Marjorie Taylor Greene and Ben Shapiro to increase web traffic and interaction with posts.

“Typically they use the algorithm and these networks of pages to amplify this content that maybe they put on their website, but then is amplified on Facebook,” Kayla Gogarty, the deputy research director for Media Matters.

Gogarty explained that these pages began to ramp up anti-LGBTQ content just as Florida passed the “Don’t Say Gay” bill. The sensationalist stories attacking LGBTQ people have utilized Facebook’s systems to amplify their voices, despite complaints from LGBTQ advocates that the algorithm is promoting hateful and wrong information.

“We’ve seen Facebook purposely decide not to tweak an algorithm so that [places like] The Daily Wire are not upset,” she said. “Profit is very clearly their number one priority.”

The study also claims that anti-LGBTQ posts have real consequences. Right-wing media channels on the platform are creating unsafe narratives surrounding LGBTQ people, claiming that they are “predators” who are “grooming” children, either to make them become gay or trans themselves or to encourage them to partake in sexual activity by bombarding them with sexually-explicit content.

These conspiracy theories and homophobic attacks have caused multiple LGBTQ-themed events across the country to be disrupted or threatened by right-wing, anti-LGBTQ, and neo-Nazi activists or canceled in response to threats of violence.

According to Media Matters, more than 350 of the over 3,000 posts total found on these pages targeting the LGBTQ community used sensationalized stories on drag queen events and children’s safety. These stories falsely portray drag queens as predators and have caused an increase in confrontations at these events, including the Proud Boys, a neo-fascist group that tries to provoke political violence, storming a library over a Drag Queen Story Hour, and protesting outside of another library for a similar event.

The issue is not confined to Facebook either, Media Matters argues. Just as Meta began to post resources for LGBTQ people during pride, Instagram, which is also owned by Meta, saw a major uptick in anti-LGBTQ content.

“Despite Meta’s newly announced resources, Instagram has allowed its users to spread propaganda against the LGBTQ community — and even against the same individuals it’s publicly celebrating,” the report said.

The report argues that anti-LGBTQ misinformation shapes opinions of not only conservative activists, but lawmakers, who then propose legislation targeting the LGBTQ community. It claims this legislation could lead to more oppressive laws, and has already resulted in anti-LGBTQ legislation or executive orders in Florida, Texas, Oklahoma, Louisiana, Alabama, and Mississippi.

Additionally, school districts or library boards in various states have attempted to ban books with LGBTQ content from classrooms and public libraries, and sensational headlines about a Pride Month event in a Dallas gay bar have Florida and Texas lawmakers considering bills to remove children from the custody of parents who allow them to attend events like Drag Queen Story Hours.

“The false narratives right-wing figures are spinning to support these bills are being projected through online platforms and news outlets and have already led to real-world harm,” Media Matters claims.

Meta declined an interview, but responded to the allegations of anti-LGBTQ content, writing in an email to Metro Weekly: “We’ve investigated and removed the content that violates our policies.”

A solution to escalating anti-LGBTQ content on their sites starts with a simple “tweak,” followed by decisive action Meta should have taken as the posts came to light, says Gogarty.

“They need to tweak down this sensational and divisive content that’s currently rewarded from its algorithm. Obviously, accurate information is more important,” Gogarty said. “There are policies against this sort of speech. And they’re either very narrowly interpreting that policy, or just flat out not enforcing it.”

The leader of the neo-fascist group NSC-131 was arrested after protesting a Drag Queen Story Hour event in Boston. 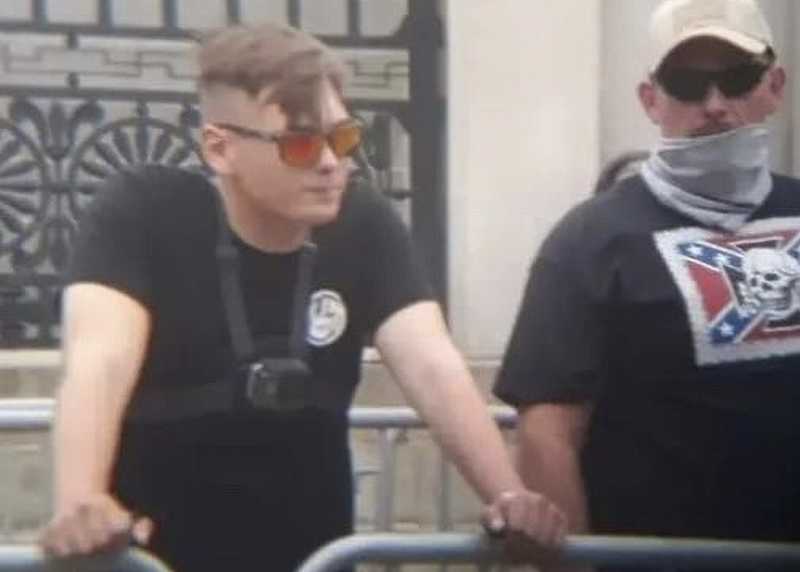 The founder of an alleged neo-Nazi organization was arrested last month for disturbing the peace after nearly coming to blows with a counter-protester at a recent demonstration in Boston's Jamaica Plain neighborhood.

The individual arrested, Christopher Hood, of Pepperell, Massachusetts, is the leader and founder of a group named the National Socialist Club (NSC-131), which takes not-so-subtle inspiration from the fascist German Nazi Party from the early 20th century -- who labeled themselves "national socialists" as well.

Hood and members of NSC-131 organized a protest on July 23 in response to a "children's Drag Queen Story Hour being held in Loring Greenough House, a historical landmark that is the last 18th century residence still in existence in Jamaica Plain.