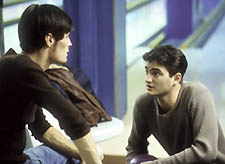 ALAIN GSPOONER’S FILM involves the complex friendship of Tiger and Kiki, in which unrequited love and unspoken desire serve as touchstones. Set in 1997 Germany, their friendship is already strained, given their nationalities — Tiger is Serbian while Kiki is an illegal Albanian immigrant constantly running from the immigration police. And then, there’s the sexual tension, mostly on Tiger’s part as he harbors affections for the partying ladies’ man Kiki.

When Kiki is busted at a nightclub and subsequently deported, Tiger hides him in his home when he returns to the country. Tiger’s secret desire grows stronger for Kiki amidst all the impending danger of a war in Kosovo.

Gritty and well-acted, Kiki & Tiger lags a bit and ends in a rather abrupt manner, nevertheless it engages with some emotionally poignant and disturbing moments.

Also on the bill, Summer Blues (t), a straight boy-gay boy, “coming of age” flick set in Norway. It’s hardly interesting, none of the characters resonate, the acting is poor, and the screenwriting is, at best, sub-par.