By Randy Shulman on October 18, 2003 @RandyShulman 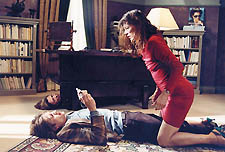 WHEN A MOVIE boasts an executive producer by the name of Ishmail Merchant, you have every right to believe you're in for a few hours of richly rewarding quality entertainment. And this first-time film from writer-director Andrew Litvack (whose association on Merchant-Ivory productions includes an acting credit as an “American Officer Presenting a Dagger” in Surviving Picasso), that belief remains firmly intact. 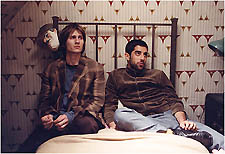 This irrepressibly French comedy stars mournful-faced Stanislas Merhar as a young man struggling with his homosexuality as well as with an overbearing opera diva mother (played to the histrionic hilt and beyond by Dianne Weist). When Thomas witnesses a murder, he goes on a search for the killer, falling into an unlikely friendship with the supremely neurotic Penelope (Jane Birkin), an actress who has dubbed so many Vanessa Redgrave films, she's come to think of herself as a literal extension of Redgrave. (Redgrave, in fact, makes an appearance in one of the movie's juiciest scenes, and inadvertently insults the poor woman by exclaiming “How could they give me such a tacky French voice?”)

The slim Merhar gives a marvelous performance, reminiscent of Gerard Depardieu when he was less of a beached whale and actually handsome. Merchant-Ivory favorite Simon Callow turns up in an intriguing cameo and Birkin is a fumbling, nervous riot. But the movie belongs to Weist, who imbues her each and every scene with a steely Diva-esque venom. “You don't mind if I call you bubblehead,” she says to Penelope, mistakenly thinking she's the older woman bedding her 23-year-old son. “I mean it kindly.”

Merci Docteur Rey offers abundant joy in its weird, loony narrative, which is only slightly marred by a certain predictability in the outcome. But as the French might say, c'est la vie!