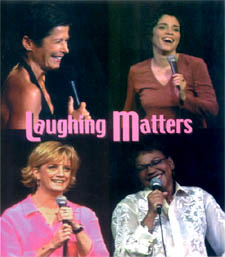 STAND-UP COMEDY is infused with such a sense of doom. You pray it will be funny, and not an agonizing thirty-minute exercise in awkward faux-chuckling, painful for all involved. When it’s bad, it’s horrible, but when it’s good, a gangbusters stand-up routine can split your sides. It can bust your gut. It can keep you in stitches. Any number of bodily injuries can occur.

And the four women depicted in Andrea Meyerson’s documentary are, quite simply, colon-rupturingly hysterical. Particularly Marga Gomez and Suzanne Westenhoefer, veterans of the stand-up circuit. The ladies are the reason that this documentary slays, though the film itself is well-constructed, as well. Sit-downs with the comediennes cover childhoods, politics, and the integration of sexuality into their routines.

All the comics come from families of varying degrees of poverty and wackiness, and each describes coming out and their first times on stage — similarly experiences in many ways, it turns out. Much of the footage comes from backstage directly before or after their acts. In one scene, Westenhoefer realizes she doesn’t have her cheat sheet just before she’s about to walk on stage and runs out to the parking lot to retrieve it from her car while the camera follows. Endearingly ad-lib.

But it’s the clips from their shows that make Laughing Matters the hour-long guffaw that it is. Karen Williams’ hyperkinetic agitated delivery, Kate Clinton’s “aww shucksness,” Westenhoefer’s acerbic deadpan and Gomez’s neuroses make for four very different, very complimentary acts. The whole thing feels very VH1 — bad if you’re music, but good if you’re a documentary — and makes you want get on stage and tell a few yourself.