The Experiment: Gay and Straight 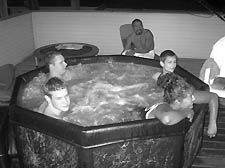 IT ALMOST SEEMS ridiculous that any self-respecting filmmaker would employ the reality genre to make a larger statement about humanity today. But that’s exactly what the creators of The Experiment set out to do. And the final product is, quite simply, soul food. Delicious, nourishing and good for the spirit, this documentary about 10 strangers (five gay, five straight) coming together and sharing their lives for a week positively soars.

Ripping a page from MTV’s Real World, the housemates — chosen from more than 800 Chicago area residents — are thrown together to have their lives taped for American audiences. The purpose? To see how gays and straights get along.

It doesn’t take long for “home sweet home” to turn sour. Kyla, the fiercely independent social worker, proclaims homosexuality to be a sin, clashing with Greg, the HIV-positive health worker. Ex-sorority-girl Jennifer balks at the thought of Deo’s lesbian wedding. And Brandon, whose wife left him for another woman, says it would never be okay if his kids turned out gay.

But there’s something about being locked in a house with no TVs, no computers, no contact with the outside world. People talk. Slowly, bit by bit, the walls come down. Through laugher, cigarettes and tears — oh so many tears — the housemates begin to see each other as people, not labels. After a while, it’s not just some faggot or straight-boy meathead sitting across from you, it’s Frank, father of a newborn baby, or Larry, the burly bear whose family refuses to come to his gay wedding.

There’s a telling moment in The Experiment when Larry says, in ordinary life, it’s easy to escape opinions and people you don’t like. You just walk away. But nobody does that here. They all stay, and talk. Attitudes evolve, opinions change. “Homosexuality now has a face,” Kyla says. Documentaries are designed to show how the world really is, but the very best ones, I think, also show what the world can be.

The Experiment: Gay and Straight

← Previous Story Flying with One Wing
Next Story → Suddenly