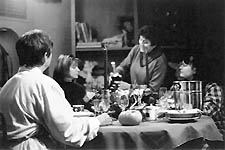 WHAT WOULD HAPPEN if one woman told the truth about her life? The world would crack open, or so the saying goes. Well, then, what would happen if four women suddenly told the truth about their lives? In Rhomie K. Thompson and David L. Lowe’s The Bridge Game, we find out.

Four women, ostensibly gathered for their regular bridge game, instead find themselves embroiled in an afternoon of bickering, binging, and revelations as one by one they find themselves teetering on the edge of ultimate desperation. Each woman, it turns out, has been privately facing an abyss of questions on her own about her past life choices and about her tenuous future. It’s just a matter of time before most all secrets come spilling out, as every member of the intrepid quartet must face the question of whether she will, or indeed if she wants to, survive. (Needless to say, cards are never actually played.)

From the spectre of breast cancer to an abusive relationship to living in the closet to simply leading a life half-lived, The Bridge Game deals with the kinds of questions that haunt many of our pre-dawn hours as we grow older. It also confronts the roles that friendships may play in these crises, either as supports or as hindrances.

Overall, the movie is an ambitious attempt to explore women’s choices (and seeming lack thereof), especially as we arrive at mid-life. However ambitious the film, though, I found the constant drone of conversation, and seeing woman after woman privately confront the possibility of suicide in the small rooms surrounding the main action, a little numbing. Though such a dialogue-driven story might be more effective in a play, I would have liked to have seen more direct exposition, in particular more images, to tell the story in a way that takes advantage of the film medium. (Call me crazy, but sometimes I would just rather see a character being desperate and why, instead of telling me why over the course of an hour.) Whatever its weaknesses, however, it’s good to see a story hit the big screen that doesn’t revolve entirely around younger characters and the same old falling in love or coming out stories.