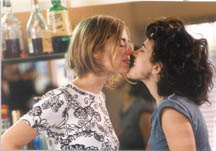 MONICA STAMBRINI’S drama mixes the octane of Thelma and Louise with the matricide and amorality of Heavenly Creatures. What it’s got that both of those movies are missing is a quite normal (at least in the beginning) lesbian relationship.

Stella (Maya Sansa) and Lenni (Regina Orioli) meet at Lenni’s gas station and immediately fall in love. Between all the car grease and espresso (Lenni’s a mechanic and Stella the station’s new coffee barista), you’d think these girls would have it made. Then, Stella’s aristocratic mom (Mariella Valentini) shows up to take her daughter home to their upper class existence. One thing leads to another, mama ends up dead, and the girls are off on a cross-country adventure to try to ditch mama’s body and escape the consequences of their act. On the way, they run into some avatars of society’s judgment, including a well-intentioned priest and some ill-intentioned punks who want to make the girls pay for some imagined insults.

What separates Gasoline from the likes of Thelma and Louise is a thin line of righteousness, but that doesn’t mean Gasoline doesn’t have its own ideas about fighting back against violence against women or society’s attempts to control the wildness of its daughters. In the end, though, it all just leads in one big circle, literally and figuratively, and the central issue of the killing (intentional or otherwise) of mama is never satisfactorily confronted, much less resolved, making the viewer wonder just what was gained in the journey at all.