By Randy Shulman on October 24, 2003 @RandyShulman 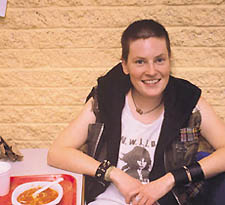 THIS CANADIAN MISHAP purports to be camp, but is, in reality, a monstrously dull, hopelessly inept ninety-minute exercise in self-indulgence from “directors” Hazel Bell-Koski, Emily Halfon and Pat Mills, all of whom should have no problem finding new careers in garbage management.

Three related stories surround the offbeat lives of a group of insufferable high school students who would benefit from a course in mass suicide. Since none of the stories — or episodes, as they’re called — are delineated, we’re required to make a mental jump as one plotline abruptly stops and another just as abruptly begins.

Shameless dumb gimmicks include a teenage vampire living in a basement (she feasts on homeless men and, later, homophobic jocks) and a 35-year-old black man portraying a high school student and who is also the son of a white family (“I just came out this way,” he marvels). Secondary High concludes with a fumbling musical number that calls to mind the “Cleveland Rocks” opening of The Drew Carey Show. It’s the best thing in the movie, mainly because it’s the end of the movie.