By Metro Weekly Contributor on October 15, 2004

LET’S GET THIS out of the way up front. There are two main aspects to Bruce LaBruce’s new film, Raspberry Reich. First, there’s the quasi-ironic spouting of revolutionary dogma. Second, there’s the hardcore fucking. 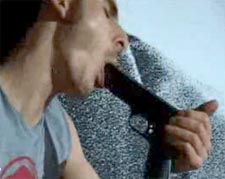 Needless to say, the second aspect is the more interesting of the two. Pity that the fucking’s not all that interesting either.

One hesitates to put together a plot summary — apparently LaBruce hesitated as well — but let’s take a shot. Gudrun is leading a terrorist revolution with her cadre of cute young men. Her plans for the overthrow of the oppressive capitalist system are twofold: kidnap the son of a wealthy industrialist capitalist pig, while making all of her male henchman fuck each other as often as possible in a “homosexual intifada.” 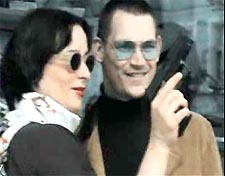 It’s a Bruce LaBruce film, so it’s no surprise that the terrorist imagery and whatnot are meant to be offensive. What’s surprising is how boring it all becomes. The subversive fun on display in Hustler White and Super 8 1/2 is missing, replaced with thudding monologues and half-baked ideas.

There are a few moments where LaBruce’s wild talent comes through. The marvelous opening sequence in which Gudrun forces her boyfriend to fuck her “out of the bedrooms and into the streets” follows the couple as they hump their way through the living room, down the hall, and onto an elevator.

Later, two henchman engage in their homosexual revolution with intense make-out sessions on public sidewalks, which judging by the reaction of passers-by where shot without notice by LaBruce, one of the few moments of guerilla cinema in a film woefully in need of some revolution.