IN THE WORLD today, Scandinavia is regarded as a one of the most welcoming spots for gays and lesbians. Denmark was the first country to offer same-sex marriage — of sorts — after all. One of the grooms in that first marriage, Axel Axgil, is among the voices in The Secret Club (%ttt%) who reminds audiences this was not always so. 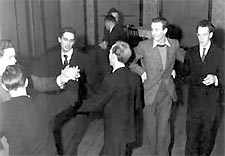 Filmmaker Kenneth Elvebakk travels through Norway, Denmark and Sweden to interview surviving members of “The Secret Club,” like Axgil. The club began in Oslo, Norway, in 1950. Chapters in Denmark and Sweden soon followed. The interviews, along with Elvebakk's narration and archival film and photos, turn back the clock to show that even today's gay utopias were once oppressive to gays and lesbians. (Although the segment focusing on Copenhagen's swinging gay life in the 1950s shows that this city may be the exception.)

Club‘s fifty-five minutes fly by with more information than sentiment. Elvebakk has created a historical document that will help inform gay culture about its noble modern beginnings. For those who have never been to any of these countries, nor ever plan to, Club should still be considered for what it illustrates about the roots of gay organizing in the Western World. 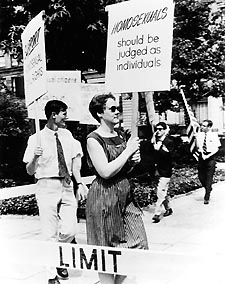 Back home, gay people in D.C. are reminded on a fairly regular basis about the role Frank Kameny played in starting the modern gay civil rights movement. Gay Pioneers (%tttt%) is one more reminder of the thanks owed this hometown hero, and then some.

Pioneers is particularly useful for reminding today's gay community that Kameny's D.C. chapter of the Mattachine Society in the 1960s helped pave the way for the 1969 Stonewall Riots with its public protests. Through interviews with Mattachine members, it also shows how the freewheeling sexual revolution that began to liberate gays led to the decline of Mattachine by pressing against the pioneering group's conventions, such as dress codes and rules of order.

Footage of Mattachine's annual Fourth of July marches in Philadelphia in the late 1960s contrasted with shots from the 2004 Equality Forum in the same city are priceless. In thirty minutes, director Glen Holsten does a superb job of tying the gay community's past to its present, succinctly showing the path from A to B.