THE TERM “on the down low” has picked up so much political baggage with books, Oprah shows, and conferences dedicated to the subject of “straight” black men who secretly have sex with other men. That's why it's unfortunate that the phrase serves as the title of On the Downlow, director Tadeo Garcia's extraordinary film about love and death in the Latino gangs of Chicago. 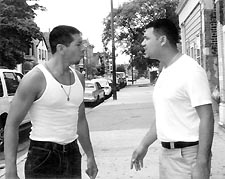 Isaac (Tony Sancho), a member of the Two-Sixes, and Angel (Michael Cortez), who's with the Latin Kings, are secretly lovers. When Angel betrays his gang to protect Isaac, he switches allegiances and joins Isaac's crew. While at first the two seem to be on a path to happiness, cracks in their world begin to widen, threatening their relationship and their lives.

Sancho and Cortez, both first-time actors, give stellar performances. They have an ease in their interactions, whether discussing their favorite cartoons (“Thundarr was a pussy!” Issac declares) or whether they would be able to actually kill someone. The film drags a bit at the beginning, as Garcia slowly builds his characters and situation. But things rapidly gather pace as the lovers hurtle toward an uncertain fate, and Garcia reflects that with a stylish use of angles, blur and other tricks that squeeze every bit of meaning out each frame.

Rough around the edges — not all the performances are at the level of the leads, a handful of clunky scenes, and some now-you-see-them-now-you-don't characters — On the Downlow is nevertheless one of a handful of films this year that simply shouldn't be missed.

Also playing is the short film Stand By , in which a director who is making a coming out movie inspired by his own life makes an unsettling discovery about his mother. With a deft touch, the story of Stand By makes it one of the festival's best short films.