THESE CERTAINLY AREN'T the same country boys we all know so well from the Falcon Studios stable. First time documentarian Tom Murray is exploring a completely different version of life on the farm, taking in the unheard voices that speak of gay life far removed from the city and traditional gay stereotypes.

Having given up his own rural life to come out in the city, Tom later in life feels the tug of the land urging him to return. He wonders how many other gay men are out there and, as it turns out, some of them are really out there. 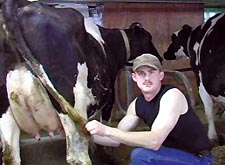 From generational milk and pig farmers who've never left Wisconsin, to a commune of Radical Faeries in central New Mexico, to a couple in Eastern Pennsylvania who've modeled their compound after early Mormon Communal settlements (and legally taken the names of their role models Brother Johannes and Brother Christian Zinzendorf), Murray elicits conversations that are uncommonly open and frank. At times his subjects are interesting simply because of the sheer normalcy of their rural lives; at others, they prove that you don't have to live in the city to be a freak. There are many flavors of queer, even where you'd least expect to find them.

Murray succeeds in providing an illuminating look at the rarely seen lives of gay rural men, but seems to have gone out of his way to exclude women. Though women are seen in the Minnesota Gay Rodeo footage, and at an unusual Pride Gathering in Wyoming, their voices are never heard. Maybe he's working on Farm Family II: The Women for next year's festivals.