By Metro Weekly Contributor on October 17, 2004

THE NEXT TIME someone in America gets the idea to do an identity-swapping film involving children, perhaps they'll look across the ocean for inspiration. Immediate Boarding (Tur och Retur), a charming Swedish film with English subtitles, does the genre proud with creative execution, entertaining plot twists and superb acting all around. 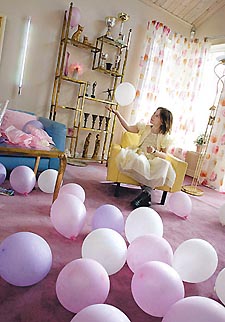 Delicate Martin and rugged Julia, both played by the versatile young Amanda Davin, are unhappy with their lots in life. As Martin says at the start of the film, “When I was born, my parents felt as if they'd won the lottery. But they didn't know me yet.” The two kids meet up in an airport before they board separate flights to see their respective non-custodial parents and quickly realize that when Martin takes off his glasses and Julia flattens down her rat's nest head of hair, they're essentially identical twins. With Julia wearing Martin's glasses, a flight attendant shows up and whisks her away for Martin's flight to see his father near the Norwegian border. Meanwhile Martin, wearing Julia's denim jacket, travels south for Julia's mother's wedding to a self-obsessed star (whose name is Peter but who's better known as Pollux) of a hit TV show called The Gladiators.

Both families are fooled long enough for shenanigans to ensue and everyone rejoices that “Julia” has calmed down while “Martin” has loosened up. Julia's stepsister finds herself in an awkward moment with Martin while Martin's cousin finds himself strangely attracted to Julia, providing some gay tension in the movie before the relatives are made aware of the role reversal.

The film has some truly sweet moments, such as when vegetarian Julia grapples with the carnivorous life on Martin's father's farm and when piano-playing Martin is convinced to try Pollux's workout equipment. Thought not overtly gay, Immediate Boarding has a great sensibility and is a wonderful treat for all ages (reading ability or Swedish fluency required).