Black Aura on an Angel

By Metro Weekly Contributor on October 18, 2004 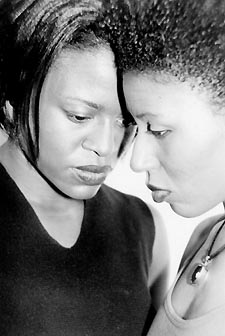 WE'D NEVER GET sucked into a bad relationship without a good incentive, would we? Faith Trimel shows us just how easily everything can go south from a great start in this psychological thriller. “Where are you from?” “I'm a Georgia peach.” (Eyelid flutter, puckered smile, sexy ooze, ooze.) All right, it's not the best pickup line I've ever heard, but it's all about the delivery, baby. And Phaedra (Sherry Richardson) is full of nothing but delivery: all velvety compelling eyes and expressive lips, the tacit come-on so thick in the air you can almost smell the sex. All this is in sharp contrast to Angel (Faith Trimel) who's all natural woman and real smiles.

If it seems to the casual observer like they're poorly matched, it's because they are: Phaedra's intensity just barely manages to mask a well of instability (to put it kindly) that will eventually threaten not only their relationship, but their very lives. Not that you can know this at the beginning. Just like a bad relationship, at its start Black Aura seems like any other sweet lesbian love story, full of promise. At the most, we expect the usual girl meets girl, girl loses girl, girl gets girl back story arc. Trimel's objective, though, is more like a cautionary tale of girl likes girl, girl loses girl, girl pulls a gun.

Things become tragic as Phaedra's resurgent mental illness begins to taint the waters of newfound love. Angel ignores red flags and direct warnings from Phaedra, the universe, even her best friend Jennings. But she's too good-intentioned to see that she's not the one to save Phaedra from herself — it will be all she can do to save herself from Phaedra. Though at moments you'll wonder if you accidentally stepped onto the set of Psycho, Black Aura does show a side of lesbian relationships rarely acknowledged. And for a debut film, it shows a lot of talent from quintuple-threat Faith Trimel (writer, director, producer, actor and musician).

Black Aura on an Angel