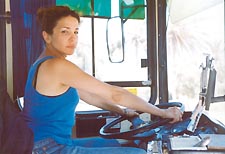 SHAHAR ROZEN’S Round Trip is like an excellent multi-course meal: a chronology of small dishes, each one with its own distinct flavor and texture, never so heavy as to satiate one’s appetite, each one building on the previous to achieve a final theme of sublime perfection.

The film follows an Israeli woman named Nurit (Anat Waxman) who, in a vague attempt to find herself, leaves a dissatisfied life with her husband in a small border town, taking her two young children with her to Tel Aviv. Barely making ends meet as a bus driver, and needing someone to stay with her children, Nurit agrees to provide room and board to a young Nigerian immigrant named Mushidi (Nathati Moshesh) in exchange for Mushidi’s childcare. Over time, Nurit’s repressed personality thaws under the benevolent rays of Mushidi’s kindness, and the two gradually develop a romantic relationship. As Nurit’s selfhood blossoms anew, she finds herself able to reconnect with her children simultaneously. Naturally, all this happiness must ultimately come under threat of Nurit’s ex-husband’s knowledge of her newfound relationship and the socio-political realities surrounding the couple.

What’s so delightful about Round Trip is like what’s so tasty about the perfect meal: appropriate pacing and synchronicity, the light touch of the chef, and the freshness of the ingredients. Rozen lets the characters set their own tempo. Nurit requires time to unfold her own personal questions about what and who she wants, and she has all she needs to accomplish each step on her journey from her home with Yossi to creating her own home in Tel Aviv. Nurit and her daughter Hila are permitted the little moments needed to let them rebuild their mutual liking and trust, while Mushidi demonstrates the warmth and freshness she adds to Nurit’s family with her dressmaking, her careful listening ear, and her sharing of her broken heartedness over being parted from her own son, Sabelo.

The actors achieve such a natural communication with one another, it’s like watching the tender moments between real-life struggling human beings. Following on such artistry, it’s hard to accept the choices made in the film’s final scenes, which seem to shortchange the movement so beautifully rendered in each character up to that point. However, perhaps it’s only because we’ve come to care so much for Nurit and her family that we are capable of railing against those choices, which after all only reflect the best wisdom of two very human, human beings.