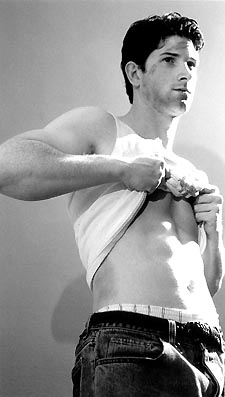 PLEASURE CAN BE a surprising thing. For example, I found myself enjoying Shiner, a 90-minute meditation on the nature of sexual brutality, warped masculinity and perverted desire. I know, I know — what’s not to love?

Shiner doesn’t start promisingly. Tony and Danny are in the world’s most deserted bar, where the only other customer is a gay Einstein who’s all raring to go into a dark alley to blow the two straight thugs. To the surprise of no one but the victim, gay Einstein is beaten to a pulp.

Intercut through all this are flashes to Shiner‘s other main characters and their own psycho-sexual-violent dramas. It’s all confusing, but after awhile it boils down to Tony and Danny beating each other up for sexual gratification, and their friend Tim, an amateur boxer, who is both repelled and attracted by being the object of another man’s infatuation.

At the other end of spectrum is Tim, who at first seems to be just another homophobic asshole fending off the voyeuristic efforts of Bob. But as he slowly falls apart, it becomes clear how degraded and broken he feels. Breaking into Bob’s home, he reveals himself both literally and emotionally. “There is nothing in me or about me that is worth all your time and effort,” he says.

These singular moments add up to a film of surprising power that overcomes some of its weaker links. Occasional forays into the world of Tim’s ex-girlfriend and her new boyfriend feel like a distraction. The above-mentioned gay Einstein plays a pivotal role in both the opening and the denouement, but bad acting on his part undermines the scenes. But those are minor blemishes on a film where the bigger the bruise, the better.