By Metro Weekly Contributor on October 23, 2004 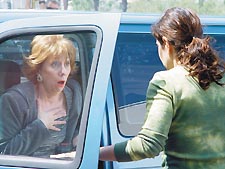 IF YOU CAN get past the slightly annoying monologues that open Girl Play — and you can, believe it — Robin Greenspan and Lacie Harmon, two performers who wrote their own love story and brought it to the big screen, shine. Once the whining about failed and staid past relationships comes to a crawl, the women start sharing the tale of how they fell in love when cast together to star in a lesbian romance on stage.

Woven between spurts of the sometimes-tedious monologue are truly rich moments with character actors Dom DeLuise (as the flaming director who casts the women in the play) and Mink Stole (as Robin’s “why can’t you find the right man?” mother), but there are also gems in the women’s soliloquies on life and love.

Robin, ensconced in a six-year relationship with Audrey, finds herself almost immediately attracted to Lacie when they’re approached about starring together in the play. Robin notes that Audrey, upon reading the script, was worried about the requisite kissing. “No tongues, no noises,” Audrey demands Â– “which,” Robin reflects later, “all I could think of was, Â‘cool title for an indie film!'”

Lacie, meanwhile, is proudly single and embraces her lifestyle because, as she puts it, “I love going to bars and leaving with strange women ’cause I don’t have to pretend to be somebody I’m not or to live up to someone’s expectations of me and anybody can be interesting for one night.”

One of the best scenes in the film comes as Robin announces to her mother she is gay. “I really wanted to say Â‘I’m a lesbian,'” she says, “but I thought, Â‘That is way too many syllables to be pummeling at the poor woman.'” After her mother goes through a “brief but thorough tour of the five stages of loss,” all is well.

Girl Play is worth the price of admission just to see DeLuise and Stole and to hear the spectacular soundtrack, but Greenspan and Harmon are ultimately likeable and interesting, pulling out some unexpectedly witty lines.