By Randy Shulman on October 13, 2005 @RandyShulman

OPENING NIGHTS ARE always hit-or-miss affairs. Sometimes you get brilliant, intoxicating films, each on a different level — Boys Don't Cry or a Beautiful Thing or a Die, Mommie, Die. And sometimes you get a dud — the kind of movie to which you wouldn't want to send your worst enemy. Guess what kind of year this is? 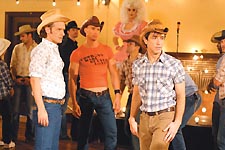 You can pretty much tell from the opening 10 minutes, actually, in which glitter studboy Steve and goth boy Adam hook up in a New York club in the late 1980s. Adam gets his first taste of coke (leading, we are told, to years of fervent addiction). It's been cut, unfortunately, with baby laxative, causing Steve to have an accident on Adam's floor, in a moment that seems like a live-action homage to South Park. Humiliated, Steve leaves abruptly, never to be seen by (the happily snorting away) Adam again.

Written and directed by Craig Chester — who also stars as Adam — Adam and Steve tries too hard to be romantic and funny and winds up being neither. Chester, whose acting career got a critical kickstart when he played Nathan Leopold Jr. in 1992's stunning indie Swoon, seems to have lost his acting gifts along the way. His Adam is a whiney, neurotic irritant, the human equivalent of shingles.

Malcolm Gets overacts so hard as Steve, he's playing to the back row of Pluto (you wonder if NASA might not recruit him as a beacon to contact aliens). Gets is the worst offender, but he's not the only one: the film is plagued with over-the-top, unnatural performances by people who should know better, including Julie Hagarty and Chris Kattan. The movie's sole salvation is Parker Posey, who must have agreed to star as a favor (I can't imagine the money was that good). In Adam's pet fag hag Rhonda, she creates the only nuanced performance — and you keep praying she'll keep popping up in other scenes to alleviate the tedium. Posey knows humor doesn't need a sledgehammer to drive it home — she uses a feather duster and she uses it well.

Every so often an amusing idea drifts in (Adam's family is terribly accident prone — ”luck challenged,” as they call it — allowing for a few briefly funny sight gags) only to be pushed out moments later by sheer idiocy (Posey and Chester sit by a statue of a sitting man and a woman in the identical pose! How clever is that?)

Adam and Steve ends with bizarre dance-off at what's supposed to be a country western bar but what looks suspiciously like a rented loft while a drag queen sings a song entitled ”Shit Happens.” All I could think was: How apropos.