NOT TO BE glib, but Unveiled is the darker side of Tootsie — just as entertaining as the ’80s classic, but deeply disturbing. And director Angelina Maccarone pulls us in immediately, as an airline cabin serves as metaphor for the arbitrary constraints still faced in an age of jet-setting globalism. As the plane soars through the vast sky, the captain brings the passengers and audience back to earth, advising them they’ve just crossed out of Iranian airspace. The women on board, accustomed to the peculiarities of ancient-minded oligarchies that dabble in nuclear physics, nonchalantly remove their headscarves. To have done so before the captain’s announcement would have been a clear violation of Iranian law. 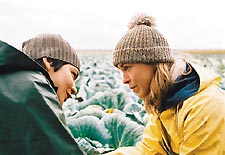 Here starts Fariba’s journey as a fugitive lesbian seeking refuge in the West. Whereas Dustin Hoffman’s Tootsie faced madcap mix-ups, Tehran-born Jasmin Tabatabai’s Fariba faces death, threat of imprisonment, cultural alienation, and so on. The script sometimes forces reactions from Fariba that seem a bit over the top, but in a context of imprisonment for not covering one’s head, how can anything seem extreme?

The gripping story is matched by Tabatabai’s acting, as a graceful, tragic, intellectual lesbian, then undercover as the asylum-seeking, political dissident, Siamak, a man a few years her junior. She is so very believable as Siamak, audiences will often be as fooled by Fariba’s guise as are her German co-workers at a cabbage farm.

Frighteningly, with the current headlines of persecution, execution and torture of gays in Iran, Unveiled could not be more timely. The film is not, however, simply a poetically acted indictment against Iran. It argues in favor of human freedom to move freely, to live freely — to have governmental authority catch up with the modernity of our technology.