By Randy Shulman on October 14, 2005 @RandyShulman 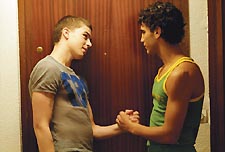 Morel, who starred in the 1994 French gay hit The Wild Reeds, takes on writing and directing duties with a lyrical, poetic sophistication. And yet there’s something not entirely satisfying about this story of three brothers who, following the death of their mother, have lost their way in life. On the surface, Three Dancing Slaves is about the choices we make. But surface is about as far as Morel gets.

Three stories are put forth, each with its own particular tone. First up, the tale of defiant, troubled Marc (impossibly sexy Nicholas Cazale), who suffers the movie’s deepest emotional loss in a horrific moment and then serves as a catalyst that propels the actions of his other brothers. Next up, Christophe (Stephane Rideau), recently released from prison and trying to make a legit go of things by getting a job at a ham factory. Finally, comes Olivier (Thomas Dumerchez) — the youngest and most sensitive of the siblings — whose budding homosexuality flowers with his friend Hicham (sensual Salim Kechiouche), who routinely engages in an athletic form of ancient slave dance known as capoeira.

Morel seems more intent on creating a constant air of titillation than crafting a resounding narrative, but when the men are this sexy, who needs story anyway? You might as well inhale its rich, French, homoerotic atmosphere and hold it in for as long as you can.

Randy Shulman is Metro Weekly's Publisher and Editor-in-Chief. He can be reached at rshulman@metroweekly.com.
← Previous Story Adam and Steve
Next Story → Guys and Balls