THE INTERNATIONAL WOMEN program pulls together two fairly disparate documentary films. A journey into the lives of Orthodox-Jewish lesbians in Israel, followed by the video diary of a young, Norwegian transsexual. Both are moving and surprisingly powerful.

In the tradition of Sandi Simcha Dubowski's Trembling Before G-d, the 2001 look at gay and lesbian Hasidic and Orthodox Jews, Keep Not Silent: Ortho-Dykes (

), offers frank — usually clandestine — discussions with a handful of lesbians whose relationships with God are central to their lives in every way. Out of respect for that relationship, some have taken husbands and borne children — 10 in the case of one anonymous interviewee. Others have avoided contact with women as a form of self-discipline. One interviewee, the daughter of a rabbi, and easily as pious as the rest, has put her faith in God for making her a lesbian. Her commitment ceremony will easily bring tears to some viewers. Director Ilil Alexander's genuine video-conference conversations illustrate the stark contrast of ancient texts and the modern world. Furthermore, she fleshes out mood for her film with day-to-day urban scenes of Orthodox neighborhoods, giving a complete experience. 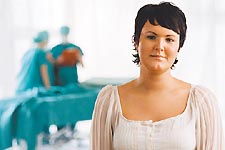 In another corner of the world, Morten is transforming into Monica, in 100% Human (

). Video camera in-hand, she seems eager to take us all along with her. This quirky movie is more than video confessional, however. Monica's mother is equally frank, sharing all her emotional reactions to her daughter's transsexualism. Monica herself stars in three music videos, interspersed throughout the film. These video interludes may seem a bit corny, but there is no doubting their sincerity. The same doesn't hold for directors Jan Dalchow and Trond Winterkjaer adding scenes of a small child as the young Monica/Morten, for example, pulling a dress from the clothesline for emotional support, nor all the underwater filming that doesn't tell us much as metaphor, but makes quite clear that Monica is not terribly fond of opening her eyes underwater.

These little quirks don't hurt 100% Human too much. Monica is so forthright in sharing her transformation, from hormones to surgery, it's easy to allow her a pop-star indulgence. She's just too charming not to forgive. And she's offering audiences more, by way of insight, than they'll ever be able to repay.