By Randy Shulman on October 15, 2005 @RandyShulman

GUYS AND BALLS has everything going against it: It’s German, so it’s subtitled. It’s a sports film — about soccer. And worst of all, it’s a giant cliché — its triumphant underdog against all odds storyline isn’t just predictable, it’s been woodburned onto our brains by Hollywood to the point where we know what’s going to happen before walking into the theater. 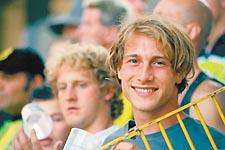 And yet, this jubilant, exhilarating film works like a wonder tonic. It’s as captivating as they come, by its very definition a big, fat, fantastic crowd pleaser. Best of all, it’s a crowd pleaser directed with style, class, and wit, a movie that hits every single button and does so with aplomb to spare.

The cast is fresh and engaging — particularly Maximillian Bruckner as Ecki, a talented young goalie whose teammates learn he’s gay and nastily discard him. Unfazed, Ecki assembles a team of his own — an all-gay team comprised of everything from a swishy (but athletic) Muslim (the delightful Billey Demirtas) to a quirky, bright-smiled guy who swears he’s really a lesbian, to a trio of bearish leather daddies, and Sven (easy on the eyes David Rott), a blond nurse who becomes Ecki’s first beau.

If you’re a seasoned moviegoer — and even if you aren’t — there’s nothing here you haven’t experienced before. But director Sherry Horman delivers everything as if it were being projected on a screen for the very first time. Sweet and charmingly absurd, Guys and Balls leaves no gay stone is left unturned. By the time the fellas don their pink jerseys and face off against Ecki’s former homophobic teammates, the movie has you in such thrall that you can’t help but cheer out loud. It puts you in a good mood and keeps you in that good mood for days to come.