By Randy Shulman on October 17, 2005 @RandyShulman

THANK GOODNESS there’s no charge to see these small, brave attempts at filmmaking. Then again, you still have to spend an hour of your life at them — and unless you’re friends with the filmmakers, or have nothing better to do on a Monday night at 6 p.m., you might consider watching the evening news instead.

First of all, the following must be asked: Did we really need a Brian the Gnome Slayer 2 (

) — wasn’t last year’s first brush with Brian enough? Clearly, budding filmmakers Brian Tosko Bello — who does a Carrie takeoff this time around, complete with a bucket of blood — and Flip Vanevski (who has mastered the art of cheesy computer effects) seem to think so. Unfunny, senseless camp without a cause, it’s 11 minutes of pure hell.

) is a noble effort, as Elizabeth Fuhrman, a teacher at a local high school, records the impact of the Day of Silence — a day in which the student body’s Gay-Straight Alliance go mum for a day in hopes of teaching tolerance, an action meant to foster ”safer schools regardless of sexual orientation, gender identity or gender expression.” It’s a little jumbled, and could use a touch more clarity (half the kids interviewed barely get out a coherent sentence — a little scary in and of itself), and it really didn’t need the addition of a speech by the school’s GSA president tacked on the end, but it’s a good try.

) doesn’t really do anything with its eight minutes, other than make you wonder if the protagonist — a smoker trying to resist the urges of ”mind-controlling” vending machines — is a man or a woman. I vote man. But I’ve been wrong before. 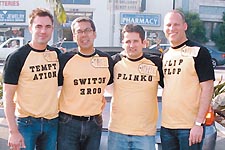 ), a buoyant home movie about a gaggle of local gay guys who chronicle their journey to L.A. to try for a spot on The Price is Right. ”If we could all design our own Showcase Showdowns,” says one bystander in the queue to the studio soundstage, ”we’d all be a lot happier.” Amen.

Although it wasn’t available for review, the program’s big ticket draw is a work-in-progress screening of Mistaken Identity — a film by Sarah Kellogg, former director of Reel Affirmations. In it, says Kellogg, ”two drag queens start a major slapfest during the Pride Festival and quicker than you can say Cher’s Farewell Tour, the cops have rounded up the combatants, including a police van full of gay characters and unsuspecting tourists Herbert and Darlene, a straight couple from Indiana.” Promise there are no gnome slayers involved and we’ll be there with our ruby reds on.