STRANGE FRUIT IS a very long and very tedious gay whodunit set against the backdrop of the Louisiana bayou. It begins, like all these films do, with a graphic and gruesome murder: the beating, rape and lynching of Kelvin, a young gay black man. 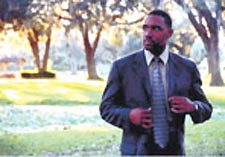 Because it’s the rural South, and because the victim was both black and gay, no one seems to really much care except for his grieving mother. It’s then she places a call to her nephew and Kelvin’s best friend growing up, William Boyals (Kent Faulcon). A successful, well-dressed attorney from New York City, William flies down for the funeral and soon begins investigating the murder himself.

Weighed down by the heavy-handed direction of Kyle Schickner, who also wrote the film, Strange Fruit takes its name, of course, from the Billie Holiday classic about racism in the South. The moody palette and clunky dialogue do little to add to a movie tackling the twin evils of racism and homophobia in America.

The all-white police department, led by Sheriff Jensey (played by scene-chewer Sam Jones), is a caricature of itself. The words ”faggot” and ”nigger” drop out of their mouths like tobacco spit, and their sneering contempt for all things Northern is at times laughable, though I’m not sure that’s the effect Schickner hoped to achieve.

What makes Strange Fruit so terrible is that at every turn the director and actors rely on cliché and clubbing the viewer over his head. The plot, when not painfully derivative and obvious, borders on the absurd. How, for example, can William look at car tracks near the murder scene, a gay juke joint, and determine on sight whose car it is?

Schickner hopes to add to William’s ”complexity” by giving him tortured relationships with his loved ones. His mother hasn’t spoken to him since the day he came out, and his lover in New York is unhappy with the emotionally distant attorney. Rather than make the character more layered, these narrative devices confuse the viewer, raising more questions than they answer.

The final scene is a doozey, quite possibly one of the most ill-conceived resolutions in film history. But it does serve the purpose of ending Strange Fruit after nearly two hours of pain, and for that, we can all be thankful.