Home / Special Feature / Reel Affirmations / Me, Myself & I

ME, MYSELF & I delivers a heady mix of the oddball and the earnest as it follows a variety of quests for identity.

). One of the old friends, Connor (Max Madrigal), has begun transitioning to male, much to the surprise and discomfort of his old buddies Leslie and Kara (Candice Hussein and Kara Lipson). The conflict erupts unexpectedly in a poolside showdown, but ultimately Desert Hotel leaves you thirsty for more substance.

) is an eccentric and racy farce about getting a little push to becoming who you’re meant to be. A pre-op MTF person named Desiree (Manou Kersting) hesitating on the precipice gets help from an unexpected source: the adult daughter (Janka Fleerackers) Desiree never knew about. Something Else (

) by Shannon Olliffe brings transgender themes to the world of claymation with some interesting results.

). Eddy tells the story of how pictures of her in compromising Mardi Gras regalia almost forced her out at work. Magically transmogrified by Eddy’s sense of the absurd, her pain becomes our hysterically funny anecdote.

), a young cowboy undertakes a mission to save her girlfriend from her ex while simultaneously challenging gender and sex expectations. Crystal Mason’s Aliens: We’ve Come for Your Children ( 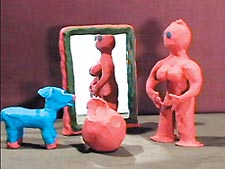 ). It’s the most direct film of the lot, and delivers a pivot point for the shorts to turn from oddball and wild to more earnestly artistic. Sum Total (A Matrimonial) (

) poses an eloquent sonnet on multiple layers of identity, with poetry and photography by Sonali and music by Sheila Chandra. Brief but beautiful.In Small Town Secrets (

), Katherine Leggett shares the incredible, yet apparently true, story of a proliferating closet that engulfs mom, dad and daughter. Leggett’s story doesn’t have much filmmaking to it, but it also doesn’t require it: The unusual circumstances of a family with not one but three closeted members is enough to captivate your attention.

In Search for Her (

), Dawn Khoo narrates the story of her own life as she cycles through phases of hiding and exploring her sexuality and her gender. The narrative overlays a series of relatively static images — ocean waves, keys swirling around a woman’s fingers — but no image actually captures forward movement. By contrast, A Girl Named Kai (

) pairs more narrative with much more dynamic photography and music that shares its rhythm and meter in a way that carries Kai’s story further along.