FRIVOLITY IS SUPPOSED to be a birthright of being gay. Politics, gay bashing and the rest sometimes make that seem like a lesson lost. Ethan Green, thankfully, is just here to be not much more than silly. 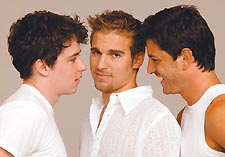 Fans of the Eric Orner comic strip of the same name are the obvious audience for this live-action version. They won’t be disappointed, save for the absence of Ethan’s hottie pal, Bucky. Many of the other regulars are there. Ethan’s roommate Charlotte (Shanola Hampton) is a familiar face, as is his mother. Meredith Baxter has infused herself into the role, meaning we’ve got a mom who is much like the Type A, uncomfortably gay-friendly India ink mom, but with more depth. As co-stars go, however, the Hat Sisters (Joel Brooks and Richard Riehle) steal the show, paying campy homage to their characters, just as Orner created them.

Daniel Letterle may not yet be as sharp an actor as Brooks or Riehle, but he nevertheless does Ethan proud. Watching this straight actor running in gay Ethan fashion -Â– all hips and wrists — should be enough to win over audiences.

Happily for the uninitiated, the movie does not rely upon references to the comic strip. For that audience, this is simply a light romantic comedy, with a lot of gay Republican bashing, and some good eye-candy.

The film does go for heart near the end. Orner always played this best by restricting sentiment to perhaps one strip in a dozen. The same rule should apply here, as Ethan is even less sympathetic on celluloid than on paper. On screen, his foibles are far more entertaining than his feelings. Be glad that the sweet ending only lasts a moment or two. Emotional Ethan might be more palatable in a sequel, once we all know Letterle’s Ethan a bit better. If not a film sequel, a gay wish list could include an Ethan series in the blooming gay cable TV universe. We could use the laughs.

Follow Will O'Bryan on Twitter @wobryan.
← Previous Story From Boys to Men
Next Story → The Lady in Question is Charles Busch