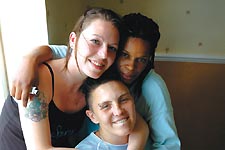 THERE’S NOT MUCH gay about Songbirds, a documentary and musical about women in an English prison, but it’s nevertheless worthwhile, whoever the Reel Affirmations audience may be. The movie looks at the histories of several inmates, turning their tragic tales into songs sung by the inmates themselves. And these are definitely stories that will shatter convictions of good and bad, right and wrong.

Mary, who seems to be a lesbian mother of three, who was also using heroin at 15, is serving four and a half years for robbery. Crack-addicted ”Scary Mary” offers a nice little rap about her temper and the abuse she’s seen. Sam, serving three years for ”arson with intent” sings from a prison gallery, surrounded by paintings that represent the night her mother took out the garbage and never returned, and other scenes of disturbed domesticity. She delivers an incredibly touching song, with a decent voice to boot. Another song, delivered by an unnamed inmate — with several more as backup singers — applies a catchy rhythm to the dangers of transporting drugs, intentionally or not. ”You can mule on a plane, you can mule on a train,” they sing. Maggie’s Irish trill about her four children –all adopted after her drug addiction landed her in prison — is heartbreaking. So is the 20-stitch scar down the side of her face. It’s one of many her husband gave her.

Though Theresa doesn’t sing, this regal woman’s tale is the last one the audience learns. And it’s gripping. Anyone who hears her story will too easily be able to see herself in Theresa’s place.