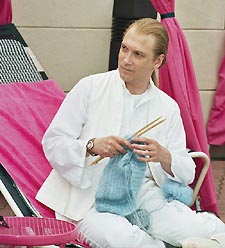 WHILE A VERY Serious Person is not an ”autobiopic,” actor, playwright and filmmaker Charles Busch has obviously pulled heavily from his own past. Anyone who saw The Lady in Question is Charles Busch at last year’s Reel Affirmations will immediately recognize this new film’s Gil as a young Busch. Gil’s mother is dead, he prefers watching Gone With the Wind to sports, and he’ll cure his ailing grandmother’s ills by putting on a show. Busch, along with co-writer Carl Andress, has created a space for his adult, actor self in the story as Jan, a swishy, strong-willed nurse from Denmark. Though Busch plays a male character this time around, worry not — he manages to get a wig on his head in one scene, at least.

Polly Bergen as the dying matriarch is a pleasure to watch. She’s made the role of loveable crone her own. Her interplay with Busch is beautiful. Young P.J. Verhoest as Gil, however, gets buried under Busch in the many scenes between the two. But asking a child to hold his own next to Busch is asking an awful lot. Busch manages, however, to carry their scenes for both of them. Some comic relief comes from Glenda, played by Busch’s longtime acting intimate, Julie Halston. Though she’s always playing the gums-and-teeth loud lady, she’s carved a great space for herself as the town’s frosted hairdresser. Andress, as her fellow stylist, Lee, has great comedic presence. His dramatic defense of nelly boys everywhere, however, is his strongest onscreen contribution to A Very Serious Person. Who knows whether it was he or Busch who wrote some of the best lines? Jan’s assessment of the pursuit of happiness is deft, as he advises young Gil: ”You Americans always want to be happy. Why is it necessary to walk around every day like a grinning village idiot?”

With A Very Serious Person, Busch shows that he can make movies that are parodies of nothing. Without psychos, vampire lesbians or drag queens, Busch has crafted a film that is heartfelt, entertaining and purposeful. — WOB