By Randy Shulman on October 17, 2006 @RandyShulman

IT’S NOT WHAT the characters do — it’s what they don’t do — that gives this coming-of-age story its distinction. That, and it was co-written by one of Canada’s leading playwrights, Daniel MacIvor.

Emerson Thorson is a precocious, intellectually gifted 13-year-old who has been home-schooled in the snow-covered woods of Nova Scotia by his parents, a couple of free-spirit crunchy types (they built their home themselves and encourage nude family saunas). Emerson’s folks decide a little socialization might not be a bad thing after all, and send him off to public middle school, where the thin, slightly feminine Emerson promptly has a run-in with a fist belonging to the school bully and convinces his English teacher, Mr. Grant (MacIvor), to dispense with the customary class reading material (”Snowboard Snowjob”) and teach Shakespeare instead.

Mr. Grant harbors a secret — he’s gay and has a particular fondness for a local rest stop — and when Emerson, coming into his own sexuality, develops a crush on his teacher, it causes a crisis for them both. 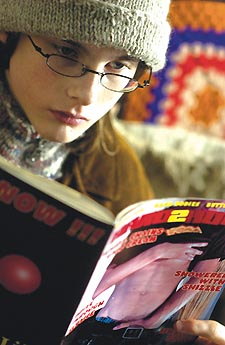 Directed by Amnon Buchbinder, Whole New Thing reveals itself carefully, in layers. As Emerson, Aaron Webber is captivating, bringing to full life the character’s sometimes apathetic, sometime overly romantic nature. It’s a strong, potent performance, one that matches the veteran adults who populate the film, including Robert Joy (Desperately Seeking Susan), a haunted, self-loathing shell as Emerson’s environmentalist father. MacIvor’s Grant is the most stable and level-headed of the ensemble, but even his demons get the best of him at one point.

With intelligence and dramatic weight, the movie delves deeply into rites of passage felt by all gay-inclined teens. Some may be frustrated by its anti-cathartic conclusion, but its inconclusiveness is more attuned to a play than a movie. Still, Whole New Thing makes for a solid ninety-minute diversion. — RS

Randy Shulman is Metro Weekly's Publisher and Editor-in-Chief. He can be reached at rshulman@metroweekly.com.
← Previous Story Local Shorts
Next Story → Tang Tang