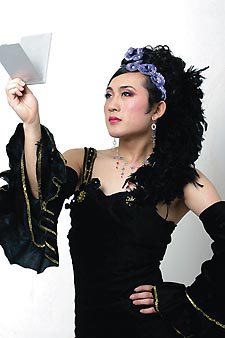 A SMALL FILM from China, Tang Tang starts with a bang and captivates until the final scene when the whole story comes full circle. Shot as a documentary that may or may not be real (think Blair Witch Project), Tang Tang follows drag queen Tang as he performs across Beijing trying to make his living as a ”reverse role” performer.

In between shows, Tang attempts to find love and struggles to define himself, while avoiding the consequences that could come from being a man performing as a woman in China. The film also captures the lives of two lesbians seeking a life outside China where they can live openly. Incredibly cute, they provide an added level of insight into Chinese gay life.

Sadly, Tang’s life is not filled with the mirth and frivolity that he presents on stage. Rather, a number of powerful moments in the film vividly capture the reality of Tang’s existence. Seeing Tang crouched naked over a plastic grocery bag while trying to find his wig reveals him to be vulnerable and frail at the core. As the film progresses, Tang’s harsh reality is laid bare.

Director Zhang Hanzi intersperses Tang’s performances with shots of Beijing to provide context for Tang’s small world. In contrast to the hand-held camera following Tang from show to show, these transitional sections are highly produced and add a more polished feel to the film. At times it can be difficult to match the subtitles to the proper speaker, but it seldom takes away from the story.

Tang Tang is a little-known film that deserves its place in Reel Affirmations. Though some of Tang’s shows are too long or repetitive, the film’s provocative moments more than balance them out. Regardless of whether Tang is a real performer or not, his performance in Tang Tang is not to be missed. — TP