Pick Up the Mic

THERE’S A GREAT moment in Pick Up the Mic when Tim’m, one of the featured gay African-American rappers, is walking down Christopher Street in Manhattan. Another kid approaches him and asks if he’s rhyming. They go to the Chelsea piers and freestyle rap together. Finally the kid asks what Tim’m is making a movie about. ”Rappers, but gay ones. Are you gay?” says Tim’m. For a second, you brace for the violent outburst, the ”You calling me a faggot?” rant. Instead, the kid says simply, ”Nah. But my cousin is.”

These sorts of interactions are what make Pick Up the Mic better than a so-so documentary about yet another gay subculture. There are several similarly spontaneous moments, and they make the whole movie worthwhile. The characters are astute about the world they live in, where homophobia is a killer, with hip-hop as its closest accomplice. But they also refuse to be put off by it, and while they do organize their own gay rap shows, they also live and perform in the hip-hop community at large, despite shouts from the crowd to stand down.

Though it drags in some parts and occasionally becomes repetitive with standard-issue calls for tolerance and acceptance, Pick Up the Mic makes for a pleasant surprise. You’ll expect that you’ve heard about this whole phenomenon before, but here you’ll see it again in a whole new light. — WD

Pick Up the Mic 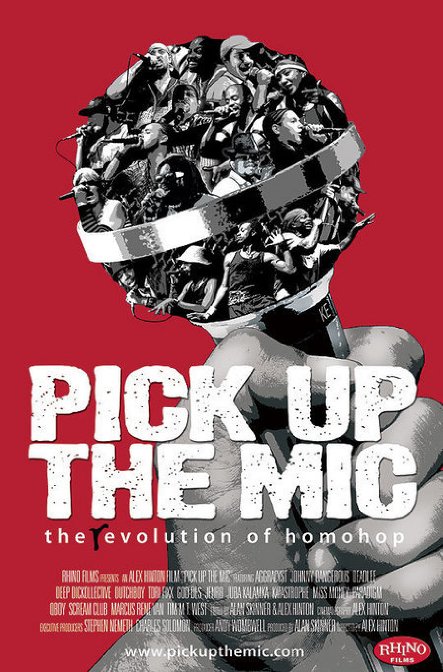